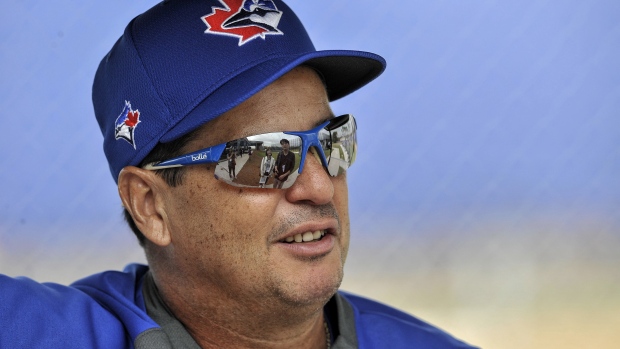 Toronto Blue Jays manager Charlie Montoyo waits for the start of a bullpen session during workouts at the team's spring training facilities in Dunedin, Fla., Friday, Feb. 14, 2020. Blue Jays manager Charlie Montoyo weighed in Thursday on how the organization and players are communicating and sharing information online during the pandemic. THE CANADIAN PRESS/Steve Nesius

Like many workplaces in the COVID-19 era, the Toronto Blue Jays have used regular Zoom video calls to stay connected during the pandemic.

Manager Charlie Montoyo recently offered a change-up by working a “happy hour”-themed conference call into the mix. That led to plans to have players connect for a video call of their own to have fun, stay connected and maintain momentum after a fruitful spring in Dunedin, Fla.

“Our culture was great, our spring training was awesome and we don't want to stop that,” Montoyo said Thursday on a conference call.

The Blue Jays were brimming with optimism ahead of the 2020 campaign before the pandemic shut things down indefinitely. A young core anchored by Vladimir Guerrero Jr., Cavan Biggio and Bo Bichette was supplemented by several off-season moves, most notably the signing of ace Hyun-Jin Ryu.

Toronto's regular season did not begin as scheduled March 26 and there is no firm start date on the horizon, although ideas are being floated for a potential return at some point this year depending on pandemic developments.

One reported possibility is for games to be played in empty stadiums in select locations. However, Montoyo said it was too early to speculate about such a plan.

“I just love the fact that Major League Baseball and the union are coming up with different ideas and I think that's great,” he said. “So I will leave those plans to them.

“My focus is my work with the Blue Jays and making sure that we're supporting our players so we can be ready whenever that time comes.”

Montoyo did provide an update on pitcher Ryan Borucki, who was shut down in February due to elbow pain. The 26-year-old left-hander, who underwent surgery last August to remove bone spurs from his left elbow, has resumed throwing in Florida.

“He's building intensity and volume and he feels great,” Montoyo said. “No setbacks.”

The Blue Jays, who have been rebuilding over the last few years, finished fourth in the American League East in 2019 with a 67-95 record.

Toronto posted a 12-6 mark in Grapefruit League play before the pre-season was shut down.

This report by The Canadian Press was first published April 16, 2020.