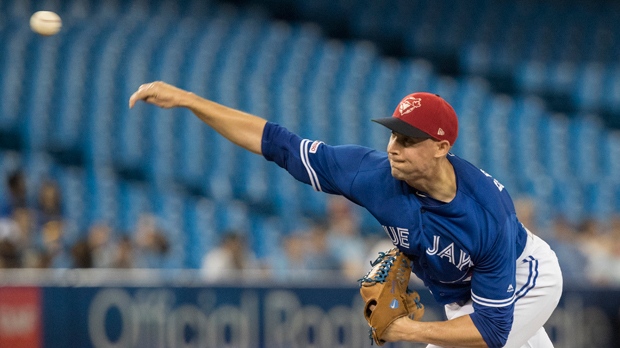 The 27-year-old Sanchez was better against the Orioles than in his last outing against the Kansas City Royals on Sunday when he surrendered six or more runs for his fourth consecutive outing.

Sanchez struck out five, but also walked four Baltimore hitters to push his total on the season to 56 bases on balls, which leads all American League starters.

Although, he held Baltimore to just three hits Sanchez only tossed five innings. He continued to be beset by control problems. He reached 100 pitches, 60 for strikes, after Toronto shortstop Freddy Galvis made a nice catch on a line out off the bat of Orioles outfielder Trey Mancini that doubled Jonathan Villar off third base to end the inning.

Sanchez got Baltimore designated hitter Renato Nunez to groundout to second and struck out outfielder Anthony Santander to begin the second inning.

But the third Oriole up, former MLB home run king Chris Davis, clubbed a homer to left. Sanchez then walked the next two Baltimore batters. Villar cashed in what turned out to be the winning run with a hard smash off the glove of third baseman Vladimir Guerrero Jr. that landed safely into left field.

Davis knocked in two more runs in the ninth with a single to right field.

Orioles starter Dylan Bundy (4-10) enjoyed a strong outing. In his team-leading 17th start of the season, he lasted 6 2/3 innings and allowed only three hits. But he left the game after yielding a two-out home run to Toronto left-fielder Brandon Drury for his eighth of the season. The drive to left made it a 2-1 game.

The Blue Jays twice left lead-off hitters at third base. Catcher Danny Jansen tripled to right centre to begin the second inning, but Justin Smoak struck out, Drury grounded out to third and Rowdy Tellez hit a shot back to Bundy for a routine third out.

In the third, centre-fielder Teoscar Hernandez hustled to stretch his hit to left centre into a double. After Eric Sogard grounded out to second Hernandez advanced to third on Galvis's bouncer to short. The inning ended when Guerrero grounded out to Orioles first base.

Notes: Blue Jays optioned left-handed pitcher Thomas Pannone and recalled outfielder Jonathan Davis from the triple-A Buffalo Bisons on Friday â€¦ Left fielder Lourdes Gurriel Jr. injured his left wrist when he made a diving catch against the Boston Red Sox on Thursday. Outfielder Randal Grichuk has a wonky back. Both are considered day-to-day.