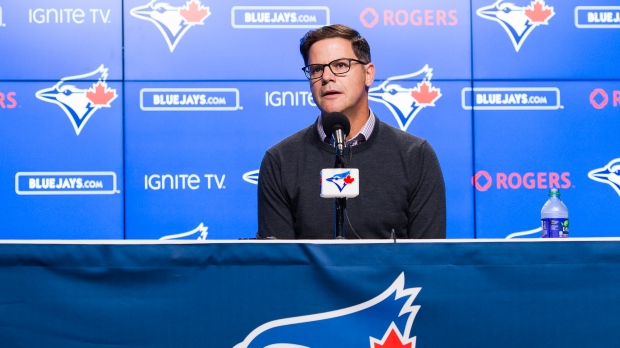 Ross Atkins, general manager of the Toronto Blue Jays, speaks to the media during the end-of-the-season press conference in Toronto on Tuesday, October 1, 2019. THE CANADIAN PRESS/Nathan Denette

The potential for the Toronto Blue Jays to have a memorable off-season is there. Now it appears to be a matter of waiting for the first big dominoes to fall so the action can really begin.

Whether Toronto strikes first remains up in the air. But with money to spend and prospect capital in tow, the team could be a player on both the free agent and trade fronts as it aims higher after returning to the playoffs in 2020.

“It doesn't take much at this point for a deal to happen,” general manager Ross Atkins said Wednesday. “I don't know if it's days or a week or two before things start to pick up for the Toronto Blue Jays, but we're prepared.”

Atkins struck quickly last month by inking left-hander Robbie Ray to a one-year deal worth US$8 million, making him the first free agent to sign in what has been a quiet off-season so far around the big leagues.

Big names like Trevor Bauer, DJ LeMahieu, George Springer and others remain on the board. Just like in other years, one notable free-agent signing or trade could unlock things for everyone else.

After a three-year rebuild, the Blue Jays opened their wallet last winter by signing ace Hyun-Jin Ryu to a lucrative four-year contract. Starting pitching remains a focal point for a team also looking to improve its overall defence and in the bullpen.

However, some uncertainty remains for the lone Canadian franchise in Major League Baseball. While Atkins said he's “super-optimistic” the Blue Jays will play in Toronto in 2021, border restrictions due to the pandemic could see them start the season south of the border.

In addition, the Globe and Mail reported last week that team owner Rogers Communications and the Brookfield Asset Management company were looking into tearing down Rogers Centre as part of a larger development project.

Atkins, who met via video with members of the Toronto chapter of the Baseball Writers' Association of America, was asked how that uncertainty might impact potential moves.

“We haven't felt any strong concerns from anyone that we've talked (to) about it,” he said. “As I reflect on that, I think that probably has a lot to do with the nature of professional athletes.

With baseball's virtual winter meetings set for next week, big-name free agents could be getting closer to decisions. For his part, Atkins said he's approaching this period as another step in the process, like he did in the last off-season or at the trade deadline.

“This is another point in time where we have an opportunity to add talent,” he said. “What we're thinking about is not only positional fits, whether that be pitching or position, outfield, infield, catching, but also how it'll impact our environment for some time to come.

“So that's something that we're talking to free agents (about) and targeting free agents for is how they will influence Cavan Biggio and Bo Bichette and Vladdy (Guerrero Jr.,) and Ryan Borucki and Jordan Romano and others.”

Romano, a reliever from Markham, Ont., was named rookie of the year. Outfielder Anthony Alford and broadcaster Mike Wilner were named co-winners of the John Cerutti Award for goodwill, co-operation and character.