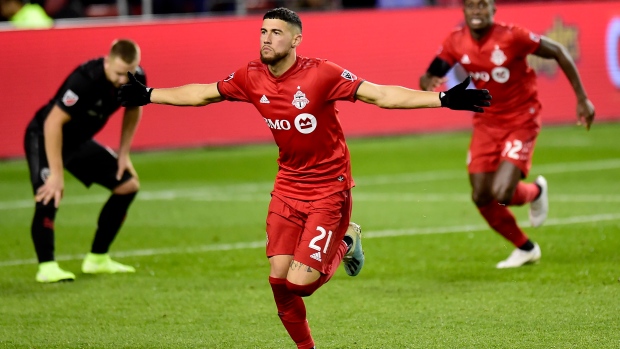 The victory snapped a nine-game winless streak (0-5-4) in MLS play for Toronto that dated back to an Oct. 3 win over the Chicago Fire. It marked Toronto's longest winless league run since going 11 in a row without a victory in March-June 2013.

It was regular-season win No. 183 for Bradley, behind only New England's Bruce Arena and the late Sigi Schmid. Bradley is coaching his fifth MLS team.

Osorio notched the go-ahead goal in the 53rd minute, racing toward the back post and then sliding to get a leg to a Luca Petrasso cross. The 29-year-old Canadian midfielder, who has scored in all 10 of his MLS seasons, started the play when he intercepted the ball just inside the D.C. half. Four passes later, following a sprint to goal, Osorio put it in the back of the net for his second of the season - and 35th in career MLS play.

The goal came in Osorio's club-record 296th appearance for TFC in all competitions. Only Sebastian Giovinco (83) and Jozy Altidore (79) have scored more for Toronto.

D.C. opened the scoring in the 10th minute, taking advantage of some slack defending. Nigel Robertha toyed with Lukas MacNaughton on the left flank before floating in a cross to an unmarked Russell Canouse, whose angled header beat Alex Bono and found the corner of the goal.

Canouse was making his season debut, after missing the first three games with a groin injury.

Alejandro Pozuelo tied it in the 24th minute with his 25th goal for TFC in all competitions, sweeping home a ball flicked on by a Michael Bradley header at the near post off a Luca Petrasso corner.

Saturday's game was played before an announced crowd of 21,501 on a damp, cool afternoon at BMO Field that prompted staff to place heaters on both sides of the player benches.

For the second week in a row, Bob Bradley went with a back three with defenders Carlos Salcedo and Shane O'Neill slotting in and Noble Okello and Jahkeele Marshall-Rutty dropping to the bench. Salcedo was suspended last time out while O'Neill, nursing a knock, dressed but did not see action.

D.C. threatened early with Bono forced to make a stop with his foot on an Ola Kamara shot less than 30 seconds from kickoff. At the other end, Bill Hamid had to deal with a Jayden Nelson shot in the fifth minute.

Jesus Jimenez's header was off-target in the 15th minute after a fine cross from Toronto wingback Kadin Chung.

Robertha appealed for a penalty in the dying minutes of the first half after going down in contact with Pozuelo. But referee Ramy Touchan was unmoved.

Toronto substitute Ifunanyachi Achara had a glorious chance in the 68th minute but his close-range shot was stopped by Hamid.

D.C. United opened this season with a 3-0 home win over expansion Charlotte and 1-0 victory at FC Cincinnati before falling 2-0 to visiting Chicago

D.C.'s Hamid came into the game with a league-leading 16 saves while Bono was tied for second with 12.

With the league pausing for the international break, Toronto next plays April 2 against visiting New York City FC.

This report by The Canadian Press was first published March 19, 2022