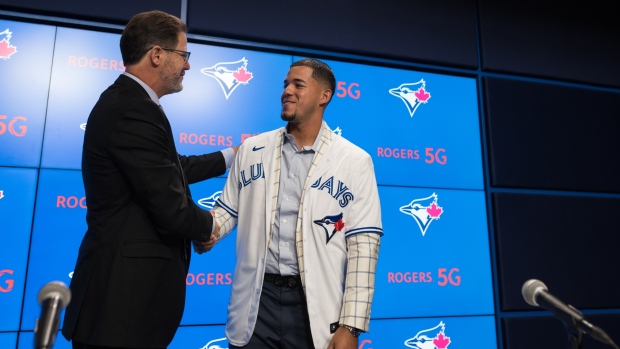 Ross Atkins, executive vice president of baseball operations and general Manager of The Toronto Blue Jays, left, shakes hands with starter José Berríos during a press conference announcing his seven-year extension with the team at the Rogers Centre in Toronto on Thursday, November 18, 2021. THE CANADIAN PRESS/Tijana Martin

TORONTO - Jose Berrios wasn't sure what he or his family would think of Toronto when he was traded to the Blue Jays in late July. Within two months, they had fallen in love with the team and the city.

That comfort level made negotiations between Berrios and the team easy, with both sides eager to keep the right-handed pitcher in Toronto. Berrios signed a US$131-million, seven-year contract earlier this week, a year before his previous contact was set to expire.

Berrios told reporters Thursday that he and his wife agreed their three children would love to live in Canada long-term after she spent a few weeks with him in Toronto during the 2021 season.

“I enjoy the way the people are here. Here we can be human, you can go out and feel safe. You can do your thing and have fun,” said Berrios. “I have three kids and my wife, (and) I feel really comfortable spending the next seven years here in this city.”

The 27-year-old Berrios, who was set to become a free agent after the 2022 season, was acquired in late July in a trade with the Minnesota Twins. Berrios was effective and reliable over 12 starts for the Blue Jays, posting a 5-4 record and 3.58 earned-run average.

Berrios had been emotional leaving Minnesota, where he played for five seasons, but the Blue Jays' way of doing business changed his mind.

“I'm going to be honest; I'd never thought I'd be playing for the Toronto Blue Jays,” said Berrios, whose wife and children were seated in the front row of the press conference. “But when we had a chance to come to this beautiful city and this great team, it made me change my mind.

“God put me in this situation and in this place to do something special.”

Blue Jays general manager Ross Atkins said that Berrios's willingness to stay with the team made re-signing him a priority as Toronto enters a critical off-season with several free agents to negotiate with.

“I think the most important factor was the mutual interest,” said Atkins. “Once we gauged that early on, we wanted to make sure we maximized that opportunity and made sure that interest was felt.”

The extension provides some long-term stability for a Blue Jays rotation that could look significantly different next season.

Ace Robbie Ray, who on Thursday won the Cy Young Award as the American League's best pitcher in 2021, declined the one-year, US$18.4-million qualifying offer the Blue Jays made last week. Ray's decision was expected as he is poised to be one of the most sought-after players in free agency.

Atkins said that his goal is to keep Toronto's core together as best he can after the team fell one win short of making the post-season.

“It has been our vision from the day that we got here to have a group together that the fans come to love and know for a long time,” Atkins said.

“We want our players to feel the same way.”

Atkins said that the length and value of Berrios's contract would not limit his ability to spend on other free agents, whether it is to retain Ray, Matz, or Semien, or acquire new talent.

“We are committed to continuing to build upon that core,” said Atkins.