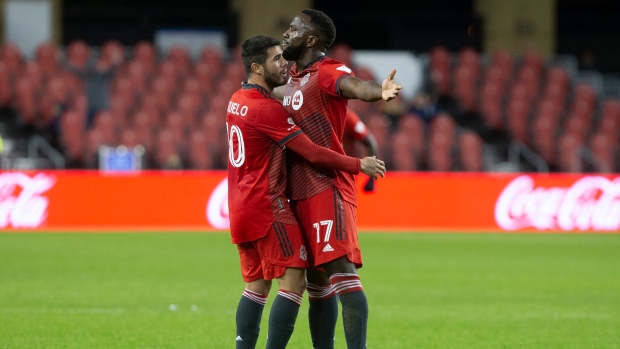 Toronto FC's Jozy Altidore (right) is congratulated by Alejandro Pozuelo, after scoring a last minute goal against CF Montreal during second half MLS action in Toronto on Saturday, October 23, 2021. THE CANADIAN PRESS/Chris Young

TORONTO - In a season with little to celebrate, Toronto FC got to enjoy a Jozy Altidore goal Saturday and the chance to hinder CF Montreal's playoff push.

Altidore, who has been a forgotten man for much of the campaign due to injuries and a falling out with former coach Chris Armas, delivered a set-piece stunner in the 95th minute with virtually the last kick of the game to give Toronto a 1-1 tie with Montreal.

Sunusi Ibrahim had given Montreal the lead in the 55th minute and, with goalkeeper James Pantemis standing tall, the visitors looked to have hung on for the victory. Then Altidore, from outside the penalty box, bent a free kick around a four-man wall that handcuffed Pantemis as it bounced in front and then went under him into the corner of the net to the delight of the announced crowd of 8,095 at BMO Field.

“It feels great to score again, especially against Montreal. It's always an added bonus with the rivalry,” said Altidore, who notched his third goal in 13 appearances this season. “It was great to see the people that came out tonight, behind the goal, to see them out there even with the season we've had, knowing obviously it's an important game. That was special. So to have that moment with them â€¦ We managed to come out with a result tonight. Not many positives but it was a positive.”

In the scheme of things, the point doesn't mean much to Toronto (6-17-8) in the standings. But it hurt Montreal (11-10-10) which dropped below the playoff line - on goal difference behind Atlanta - as New York City FC and the Red Bulls both won.

Pantemis said the Montreal players were disappointed, with the draw feeling more like a loss.

“We knew that we needed those three points. We had them until the end, unfortunately, we couldn't hold the score,” he said. “I know everybody is disappointed, upset also. We have three games left and we have to start winning games. There is one more very important game against the Red Bulls next Saturday. We will have to focus on that, now.”

Toronto outshot Montreal 16-7 (9-1 in shots on target) and poured on the attack as the second half wore on.

“I think we deserved more,” said Toronto coach Javier Perez. “I think the numbers say that we deserved more and it's a little bit unbelievable that we were 10 seconds away from going empty-handed.

“Everything was on our side except for one thing, which is the scoreboard. So I think in the end we are happy with that point â€¦ I think tonight that extra effort that was needed, they put in on the field - the energy - and in the end we got a point that I think was well deserved.”

The Montreal goal came off a cross from Zachary Brault-Guillard. Toronto 'keeper Quentin Westberg could not hang onto the ball and Ibrahim, johnny-on-the-spot, was left with a simple tap-in for his fourth goal of the season.

It came on Montreal's only shot on target and the 19-year-old Nigerian youth international celebrated by racing over to the corner flag and kissing the turf, before being swallowed up by teammates.

Montreal, which finished 18 points behind TFC last season, arrived 17 points ahead of Toronto and looking to consolidate its position above the playoff line.

Montreal won both meetings with Toronto earlier this year, 4-2 in the season opener April 17 in Fort Lauderdale and 3-1 on Aug. 27 at Saputo Stadium. It has never won three straight over Toronto.

“I'll be the first guy to tell you it's disappointing,” said Altidore. “But nobody's running away from anything. We take all the criticism on the chin and rightly so. But there's more here, I'm a firm believer in that. People will come up with the pitchforks, but that's part of the business. I just feel better, man. To run and move around without pain, it feels amazing. Because it's been a while.”

With Omar Gonzalez and Kemar Lawrence both injured, TFC captain Michael Bradley started at centre back in his 249th appearance for the club in all competitions.

Toronto began to stroke the ball around, building on possession and often looking to release pacey Jacob Shaffelburg. Pantemis stopped a Patrick Mullins free kick in the 34th minute, with Montreal clearing the rebound before any further damage could be done.

Toronto outshot Montreal 8-3 (3-0 in shots on target) in the first half.

Spanish playmaker Alejandro Pozuelo replaced Mullins to open the second half for Toronto, with Altidore coming on in the 66th minute.

There was some niggle as the game wore on, with both Jonathan Osorio and Shaffelburg booked for showing their displeasure at Montreal players.

Montreal had opportunities to put the game away,

Djordje Mihailovic had a gilt-edged chance in the 76th minute after Joaquin Torres sent a low cross through the box but Brazilian fullback Auro got a foot in front of his shot. Montreal substitute Bjorn Johnsen fired wide in the dying minutes.

Perez made six changes to the starting 11 that lost in Miami.

Westberg, making his seventh start of the season, took over in goal for Alex Bono whose errant pass led to the first goal in Miami. Richie Laryea, Auro, Chris Mavinga, Mark Delgado and Osorio also slotted in.

Toronto was without the injured Gonzalez, Lawrence, Ifunanyachi Achara and designated player Yeferson Soteldo as well as long-term absentees Ayo Akinola, Ralph Priso and Tsubasa Endoh, who are recovering from surgery.

Next up for Montreal is Wednesday's Canadian Championship semifinal at Forge FC, followed by a Saturday visit to the New York Red Bulls.

Toronto hosts the Philadelphia Union on Wednesday before playing at Atlanta on Saturday.

This report by The Canadian Press was first published Oct. 23, 2021