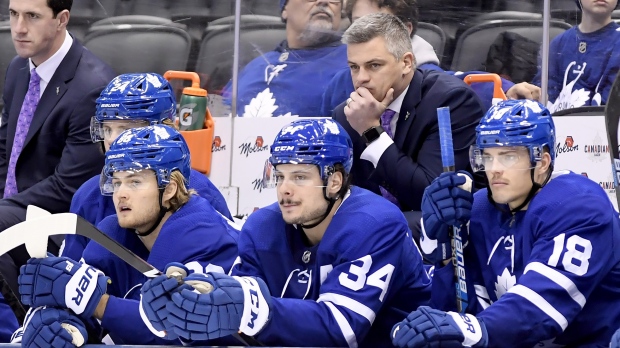 A re-energized roster blasted out of the gate with a trio of road wins following Mike Babcock's dismissal, playing an inspired, puck-possession style that produced 14 goals for and just three against.

Another change under Keefe - a rookie behind an NHL bench, but one with a parallel view to Leafs general manager Kyle Dubas about how the game should be played - was practice habits. There was more emphasis on skill development, while music blasted throughout Toronto's facility during some drills.

The upbeat tunes were still there Friday, but with losses in three of their last four, the good vibes around the Leafs have melted away as the team finds itself 13-13-4 and once again outside the playoff picture.

“There's no nights off in the league,” Keefe said. “It comes at you in a hurry.”

The 39-year-old wants his talent-loaded players to express themselves in the offensive zone without forgetting defensive responsibilities. That's what happened in those first three games after the more rigid, old-school Babcock was fired Nov. 20, with Toronto's best performance under Keefe coming in a 6-0 dismantling of the league-worst Detroit Red Wings.

But while the Leafs, who open a four-game road trip Saturday against the St. Louis Blues, have largely improved without the puck, some of the offensive flair has gone stagnant with only four goals in their last three games.

Keefe was happy with the play in their own zone in Wednesday's 3-1 home loss to the rested Colorado Avalanche in the second game of a back-to-back, but that can't mean sacrificing opportunities at the other end of the rink.

“We feel good about the game we're coming off of,” said Keefe, whose team will also visit Vancouver, Calgary and Edmonton on the upcoming trip. “There's a lot of good things that we wanted to do defensively. That's a priority, but we want to make sure we can pair it with the offensive piece and put it all together.”

While the Leafs have struggled of late, there's plenty of information to suggest they'll come out of this stretch soon.

A franchise that began the season with Stanley Cup aspirations, Toronto is fourth in the league in possession at 5 on 5 and has victories in just four of 12 games decided by one goal this season, including four losses after 60 minutes.

The bad news is the Leafs have 13 wins and 30 points through 30 games and sat 22nd in the overall standings heading into Friday's action. At the same stage last year, they had 20 victories, 41 points and were second in the 31-team league, while they had 19 wins, 39 points and occupied fifth in 2017-18.

Although things aren't coming as easy as they were in his first week, Keefe's demeanour hasn't changed.

“He's always been a pretty calm and collected guy,” said winger Kasperi Kapanen, one of a number of Leafs who played for Keefe with the AHL's Toronto Marlies. “He never really panics, which is a good thing.

“You never want a coach that's yelling and screaming and panicking.”

Also a mid-season hire by Dubas in the OHL with the Sault Ste. Marie Greyhounds in 2012, Keefe said there's no way to know how long it will take his players to get a handle on the new systems.

“Each situation's different,” he said. “They're gonna grasp it in their own time.”

Leafs centre Auston Matthews, who had two goals and an assist in Keefe's first two games in charge, but just one point in the last five, said it's a matter of soaking up information so they're reacting without a second thought.

“It just doesn't happen overnight,” he said. “When you're making these big changes you're going to make mistakes, you're going to get caught out there thinking a little bit because you've been so used to one thing.”

“We're trying to roam around the offensive zone a little bit more than we did before,” Kapanen added. “Structure is big for (Keefe), but at the same time, he lets the boys play, which is big for this team with all the skill that we have.”

Keefe would like to see his team maintain the strong defensive structure it showed against Colorado, while getting back into more dangerous areas on attack.

“We settled on the perimeter a lot (against the Avalanche),” he said. “We took a lot of long-distance, perimeter shots, didn't really use the skill set that we have and the things we were doing early on.

“Part of that is the opponent. They're making it harder on us and they've adjusted, but there's still some spots where we think we can be a little more engaged offensively and do some different things to help bring the skill level of our group out.”

Notes: Leafs captain John Tavares (personal) missed practice, but is scheduled to play against St. Louis. ... Toronto winger Andreas Johnsson is heading to the long-term injured reserved after a taking a shot off his leg Wednesday. Pontus Aberg was recalled from the AHL and skated on a line with Matthews and William Nylander. ... The Leafs also called up forward Nic Petan and defenceman Martin Marincin.

This report by The Canadian Press was first published Dec. 6, 2019.