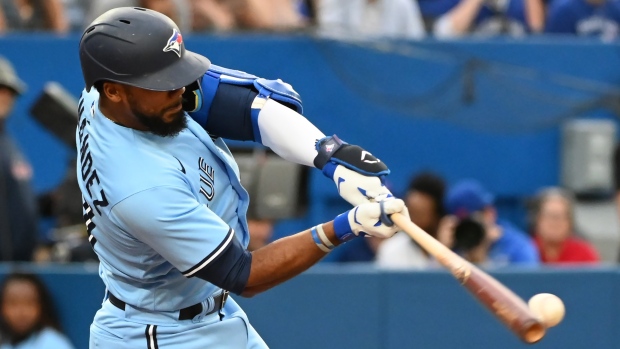 TORONTO - Blue Jays manager Charlie Montoyo made sure to keep Yusei Kikuchi feeling confident as he endured a tough stretch of starts over the last month.

The left-hander rebounded nicely Thursday against the Tampa Bay Rays, throwing six strong innings in a 4-1 victory at Rogers Centre.

“I've been talking to him and I said, 'Man, you've got better stuff than all of our starters,”' Montoyo said. “And that's a big compliment to tell somebody when you've got (Alek) Manoah and (Jose) Berrios and the rest of the guys.”

Kikuchi (3-4) had much better command over his 80-pitch outing than in his last few starts.

He was able to locate his fastball, had an effective slider and brought back his cutter in his first victory since May 16. Kikuchi had a season-high eight strikeouts and allowed one earned run, a walk and four hits.

“Just being able to perform today, go deeper into the ballgame, throw six innings and do my part and then (celebrate afterwards) was really fun,” Kikuchi said via a translator. “I'm just really happy to be able to contribute.”

Teoscar Hernandez and Santiago Espinal each hit two-run homers and Matt Chapman made some strong plays at third base to help preserve the lead.

Trent Thornton, David Phelps and Adam Cimber each threw an inning of scoreless relief as Toronto won for the third time in four games.

The Blue Jays (43-33) moved into a second-place tie with Boston in the American League East standings. Tampa Bay fell 2 1/2 games behind Toronto and the idle Red Sox, who occupy the top two AL wild-card spots.

Isaac Paredes hit a solo shot for the Rays (40-35), who have dropped three in a row. Toronto outhit Tampa Bay 9-5.

Tampa Bay opener Matt Wisler worked a scoreless frame before handing the ball to Ryan Yarbrough, freshly recalled from Triple-A Durham. Yarbrough gave up an infield single to Alejandro Kirk in the second before Hernandez hit his eighth homer of the year.

Kikuchi didn't allow a hit until Yandy Diaz stroked a two-out single in the third inning. Tampa Bay halved the lead in the fourth when Paredes curled a solo shot inside the left-field foul screen for his 11th home run of the season.

Kikuchi fanned Taylor Walls in the fifth inning for his 400th career strikeout. The left-hander gave up back-to-back singles in the sixth but Chapman made two strong defensive plays to stifle the threat. He started a 5-3 double play and then short-hopped a Randy Arozarena grounder before making a strong throw to first base for the third out.

In the seventh inning, Thornton gave up a single to Vidal Brujan, who stole second and took third on a throwing error by rookie catcher Gabriel Moreno. Chapman's defence came in handy again as he chased down a Francisco Mejia fly ball in foul territory to retire the side.

“He's as good a defensive player as there is in baseball,” said Rays manager Kevin Cash. “Not just at third, anywhere. The impact that he has on the game defensively is pretty spectacular.”

Lourdes Gurriel Jr., floated a single to right field in the bottom half of the frame before Espinal smacked his sixth homer of the year. Yarbrough (0-4) allowed four earned runs, eight hits and a walk over 5 1/3 innings.

Cimber picked up his fourth save. Announced attendance was 22,987 and the game took two hours 55 minutes to play.

This is the first time the Blue Jays have played a five-game series at Rogers Centre.

It's the 12th time that Toronto has played a series of at least five games in franchise history and it's the fourth such series to be played at home (the others were in 1977, '79 and '80 at Exhibition Stadium).

An extra game was tacked on to this week's series to include a game originally scheduled for April 4.

The Rays placed pitchers Brooks Raley and Ryan Thompson on the restricted list before the game. Right-handers Javy Guerra and Phoenix Sanders were added to the active roster from Triple-A Durham.

Neither team has confirmed starters for Saturday's doubleheader or the series finale Sunday afternoon.

Tampa Bay's Shane McClanahan (8-3, 1.77) and Toronto's Kevin Gausman (6-6, 2.93) will likely pitch Saturday but it's unclear whether they would start in the afternoon or evening.