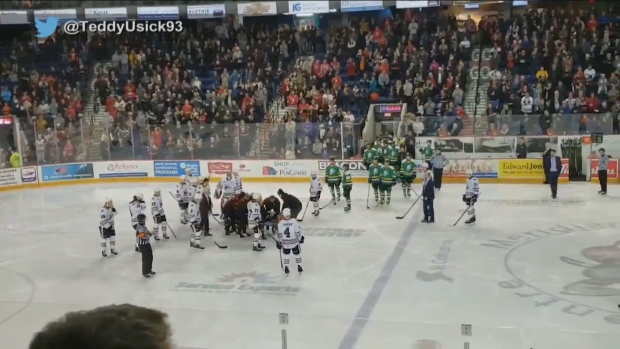 A goalie for the Niagara IceDogs has been injured during an OHL game on Thursday night. (Twitter/TeddyUsick93)

TORONTO - A game between the London Knights and Niagara IceDogs that was suspended due to a severe injury suffered by a player has been rescheduled by the Ontario Hockey League.

Niagara goaltender Tucker Tynan was hurt in the opening minute of the second period in Thursday's game, but the rescheduled game will be replayed in its entirety on Feb. 4 in St. Catharines, Ont.

Video of the play showed a Knights player collide with Tynan in the crease 40 seconds into the second period.

Tynan tried to get up, then dropped to the ice and looked to clutch his right leg as a pool of blood emerged from his goalie pads.

Medical staff from both teams tended to the 17-year-old from Chicago on the ice before he was carted off on a stretcher and taken to hospital, where he had surgery on his thigh.

IceDogs general manager Joey Burke detailed the severity of the injury to reporters Friday, saying the collaborative efforts of both teams' training staffs and on-ice personnel saved Tynan's life as he could have bled to death.

Just wanted to say thanks to everyone for the kind words, truly they mean more than anyone can ever know. An unfortunate situation, looking forward to recovering and coming back even stronger and healthier than before❤️❤️