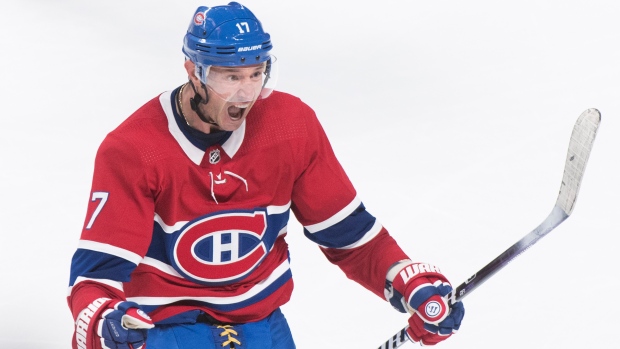 MONTREAL - The Maple Leafs' offence completely fizzled out in the third period, leaving the door wide open for a Canadiens comeback.

Marco Scandella scored late in the third and Ilya Kovalchuk netted the overtime winner as the Montreal Canadiens came from behind to defeat the Toronto Maple Leafs 2-1 on Saturday night.

The Canadiens dominated the third, outshooting Toronto 16-1 and scoring late in the frame to force overtime.

“They came with a lot of momentum, some desperation,” said captain John Tavares, who put Toronto up 1-0. “It's human nature to be a little safer in those circumstances. We had to find a way to get on their half of the ice more and generate some offence and push to increase our lead.

“We had to find a way to close them out.”

The third period started well for the visitors, with Tavares breaking a 0-0 tie on Toronto's first shot. The Leafs captain fired a puck low, far side into traffic that found its way past Carey Price at 1:06 - his fourth consecutive game with a goal.

But that shot turned out to be Toronto's last of the frame. The encounter opened up from there as the Canadiens pressed for the equalizer.

“The pace of play increased dramatically after that goal,” said Leafs coach Sheldon Keefe. “They were pushing and we didn't handle it well. I didn't like how we played offensively. When we had the puck, we did all the things that we don't want to be as a team and just gave it back to them.

“We never had a chance to get going.”

Despite being outshot, Toronto's defence - without injured players Cody Ceci and Morgan Rielly - did well to limit Montreal's high-grade chances. But the home team finally scored with 2:33 left in the game when Scandella's slap shot from the point found an opening under goalie Jack Campbell's left pad.

“At the end of the day, I just have to make one more save before overtime and we get two points,” said Campbell, who stopped 28 shots in his second game in as many nights. “I'm definitely not happy giving that one up, to give them life again and to blow that lead in the third.”

Montreal then scored off the rush 1:43 into overtime. After Campbell made an initial save on Nick Suzuki, the veteran Kovalchuk netted the rebound for his sixth goal as a Canadiens player.

Kovalchuk's wife and kids, in town from California for the week, were at Bell Centre.

“It was my kid's 11th birthday yesterday and that's what he asked me,” said Kovalchuk, a fan favourite in Montreal. “We already gave him a PlayStation, but he said `I want you to score, that would be the best present.' I think he'll be satisfied, for sure.”

The Canadiens (27-23-7) have won three games in a row and seven of their last nine as they continue to fight for a playoff spot in the East. Montreal is five points behind the Maple Leafs (29-19-8) for third in the Atlantic Division.

“We're just taking it one day at a time,” said Scandella, who scored his first goal in a Canadiens uniform. “We're playing playoff hockey right now. We're playing for our lives. We just have to keep bringing it every day.”

After a scoreless first, the Leafs came out flying in the second. Justin Holl rifled a one-timer off the crossbar 40 seconds into the period. Price stopped Tavares with the pad alone in front late in the frame - one of his 22 saves.

The Canadiens also won the first two games against the Leafs this year. The teams face each other for a fourth and final time this season on Apr. 4.

Notes: Jonathan Drouin (wrist surgery) was back on the ice for the first time since Nov. 15. Shea Weber remains sidelined with a lower-body injury. Price improved to 8-2-0 in his last 10 games. Defenceman Xavier Ouellet played his first game of the season. Rookie Ryan Poehling was sent down to the AHL's Laval Rocket. NHL legend Bobby Hull was in attendance at Bell Centre.

This report by The Canadian Press was first published Feb. 8, 2020.