Kyle Dubas on future with Maple Leafs: 'I have to be held the most accountable' 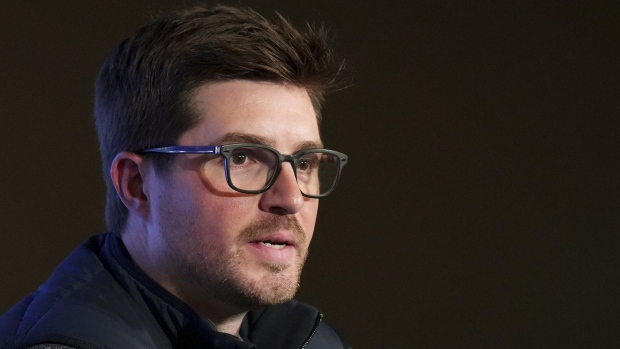 Toronto Maple Leafs general manager Kyle Dubas speaks during a press conference in Toronto on Tuesday, May 17, 2022. Signed to a five-year contract when he took the reins as Toronto Maple Leafs general manager at age 32 in the spring of 2018, Dubas has helped lay the groundwork for the franchise to reach unparalleled regular-season success. THE CANADIAN PRESS/Nathan Denette

Signed to a five-year contract when he took the reins as Maple Leafs general manager at age 32 in the spring of 2018, Dubas has helped lay the groundwork for the franchise to reach unparalleled regular-season success.

Records have been broken and individual achievements celebrated.

The playoffs, of course, have been another matter entirely.

Minus a deal to remain in Toronto beyond the 2022-23 campaign, the GM said on the eve of training camp he takes no issue with the team's wait-and-see approach regarding his future following a sixth straight post-season - including four during his tenure - where Toronto failed to advance.

“We're an organization that preaches accountability,” Dubas said Wednesday as players reported for testing and physicals at the club's practice facility. “I don't view myself as any different.

“In fact, I believe I have to be held the most accountable.”

Dubas, who indicated he won't be addressing his future again publicly until after the season, has hung his hat on an offensively gifted core led by 60-goal man Auston Matthews, Mitch Marner, John Tavares, William Nylander and Morgan Rielly.

Whether it was the seven-game losses to Boston (2018 and 2019), the surprise ouster at the hands of Columbus (2020), Toronto's collapse against Montreal (2021) or last spring's strong yet fruitless showing versus two-time defending Stanley Cup champion Tampa Bay, Dubas has resisted whatever urge there might have been to remake the roster and start fresh.

No matter what happens from here, that unwavering faith will likely define his term with the Leafs - not matter when it comes to a close.

“He's confident in himself, he's confident in us as players,” said Matthews, who led the NHL in goals for the second straight season and won his first Hart Trophy in 2021-22 as league MVP. “That's what you want from your general manager ... just that belief. Clearly he believes in our group.”

It also goes both ways.

“He's done a tremendous job in what we have going on here,” Tavares added.

Toronto, which hasn't advanced to the second round of the playoffs since 2004 or won the Stanley Cup since 1967, pushed Tampa to the brink last spring, but ultimately blew a 3-2 series lead before losing Game 7 on home ice.

Despite enduring the same frustrating finish, that defeat felt different inside and outside the locker room.

Dubas is confident next time - finally - will be different on the scoreboard.

And he's no doubt aware of the potential consequences if it isn't.

“If we have the year that we're capable of, and the team plays the way that it's capable of and executes on it at the end ... my situation will get taken care of,” he said. “My confidence is in the group of people that we have here.

“The players, the staff - in all facets - because I think it's a special group.”

Tied to Dubas professionally for much of the last decade dating back to their time in junior with the OHL's Sault Ste. Marie Greyhounds, Leafs head coach Sheldon Keefe said his GM is singularly focused following a 2021-22 campaign that saw Toronto set new franchise highs for wins and points.

“Help this team succeed and win a Stanley Cup,” said Keefe, who like Dubas enters the season with questions about his future should the team falter. “I have worked with him for quite some time now and been through a lot with him.

“He's never allowed anything to be a distraction, both to the group or to himself.”

Toronto's biggest question mark heading into camp is its goaltending after Jack Campbell signed with the Edmonton Oilers in free agency. The Leafs plan to go with the tandem of Matt Murray and Ilya Samsonov, but both arrived with significant warts on their respective games in recent years.

“Nothing has been promised to either,” Dubas said. “And nothing will be given to either.

Not unlike the GM in need of a new contract.

“I'm more than happy to go through the year and be evaluated,” Dubas said. “I believe in our group and know what we're capable of.”

Much like his GM, Matthews addressed his contract situation Wednesday - and then added it won't be something he talks about in the media again.

The sniper has two seasons left on his six-year, US$58.2-million contract that could potentially walk him into unrestricted free agency in July 2024.

Matthews, who turned 25 on Saturday, can't ink an extension with Toronto until next summer, but understands why the questions are being raised now.

“I'm focused on winning and continuing to improve and help push this team over the edge,” he said. “When that (contract) time comes, we'll deal with it. But I think I've been pretty clear. I've loved my time here. I've really loved playing in the city of Toronto. I consider it home now.

“We're all working towards that one ultimate goal.”

One player not currently working towards that goal without the Leafs - at least in-person - is defenceman Rasmus Sandin, who remains unsigned.

The 22-year-old restricted free agent started to show last season why the Leafs drafted him 29th overall in 2018, but there's also concern he'll be well behind his teammates if the stalemate drags on.

Toronto winger William Nylander went through a similar situation in 2018 when he missed the first two months of the season because of a contract dispute, and never really got on track once he agreed to a new deal.

“This is pivotal development time (for Sandin),” Dubas said. “We certainly wish he was here, because I do think (camp) has massive value.

“We hope that he's here as soon as possible.”

Dubas said Pierre Engvall suffered a foot/ankle injury during off-season training in Sweden. The forward will be re-evaluated at the start of next month, but it's hoped he'll get into some exhibition games.

Meanwhile, defenceman Timothy Liljgren (hernia) had surgery Friday and is expected to be out until at least early November.