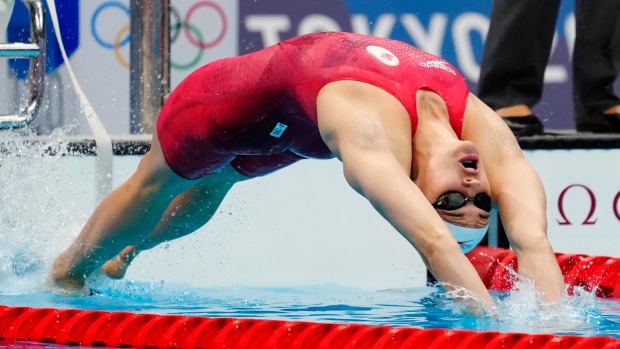 TOKYO -- Kylie Masse has won her second medal of the Tokyo Olympics with a silver medal in the women's 200-metre backstroke.

The Canadian women's swim team has generated five medals in Tokyo, including Masse's other silver in the 100-metre backstroke on Tuesday.

"I know I have high expectations of myself, but I'm really happy to have gotten on the podium a second time at an Olympic Games," Masse said.

She has a chance at a third medal as she's expected to swim the backstroke leg of the women's medley relay on Sunday.

Masse (pronounced Moss) led at 150 metres in the 200, but was caught at the wall by McKeown.

"I knew it was going to come down to the last bit," Masse said. "I think maybe from how I felt, my stroke rate maybe slowed down a bit at the end.

"I'll have to look back on the race and talk to the coaches, but that was a best time for me, a Canadian record, so I have to be pleased with that."

This report by The Canadian Press was first published July 30, 2021.