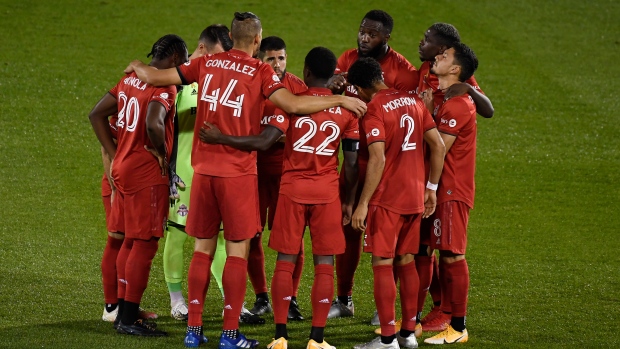 EAST HARTFORD, Conn. - Canadian fullback Richie Laryea had a goal and two assists as Toronto FC rallied in the second half to defeat league-leading Columbus Crew SC 3-1 in a battle of Eastern Conference heavyweights Sunday.

Alejandro Pozuelo contributed a goal and an assist to help Toronto end Columbus' six-game unbeaten streak while extending its own undefeated run to four (3-0-1).

Laryea had a hand in Toronto's first two goals and then scored on a brilliant solo effort in the 76th, dancing past two defenders before firing home a shot from a tight angle.

It was a game of two halves.

While Toronto (8-2-4) had slightly more of the ball in the first half, Columbus had the better chances and led 1-0 at the break. But TFC came out flying in the second, imposing its will and showing off its championship credentials.

Columbus (9-2-3) went ahead in the 40th minute on a Chris Mavinga own goal. A fine Pedro Santos ball, aimed at Gyasi Zardes, landed between Mavinga and goalkeeper Quentin Westberg just outside the six-yard box. A sliding Mavinga's attempted clearance went into the goal.

Jozy Altidore tied it up in the 48th minute on TFC's first shot on target. Pablo Piatti found Laryea down the right flank and the midfielder-turned-fullback sent a low cross to Pozuelo, who put the ball on a platter for Altidore to hammer home for his second of the season - and 73rd of his MLS career.

It was the ninth assist of the season for Pozuelo, who came into weekend play leading the league in that category.

Toronto had chances to go ahead soon after but Ayo Akinola's header went wide in the 51st, Pozuelo hit the goalpost in the 52nd and Laryea was stopped by goalkeeper Eloy Room in the 54th.

Pozuelo made it 2-1 in the 59th minute. Laryea found him just outside the penalty box and the Spaniard left Room rooted to the spot with a shot into the corner.

It was Pozuelo's sixth goal of the season and third in as many games. Laryea, meanwhile, tied his 2019 total with his second assist of the contest.

It was the Crew's first setback since a 1-0 loss to New York City FC on Aug. 24. It also marked only the second time this season that Columbus, which came into the match having given up just a league-low five goals in 13 games, had conceded more than once in a game.

It was the first of six regular-season contests for Toronto at Pratt & Whitney Stadium at Rentschler Field. All three Canadian teams have been forced to find a pandemic home away from home because of travel restrictions barring U.S. clubs from crossing the border.

The 38,000-seat stadium, normally home to the UConn football team, is named for Pratt & Whitney aircraft founder Frederick Rentschler. It is located on a former airfield that was donated by Pratt's parent company, United Technologies, to the state of Connecticut.

While the stands were empty Sunday, Toronto president Bill Manning says the club plans to look into opening the doors to some fans at a later date.

TFC was slated to charter back to Toronto after Sunday's game to spend a few days at home under quarantine before returning to Hartford for a game Saturday against Philadelphia.

Columbus came close in the 20th minute with Mavinga forced to clear a Luis Diaz shot off the goal-line. Two minute later, Westberg stopped Zardes with his leg at point-blank range after Argentine attacking midfielder Lucas Zelarayan chipped the ball over three defenders.

Zelarayan hit a swerving shot just over the bar in the 34th minute after Mavinga was dispossessed by Diaz near midway.

Columbus outshot Toronto 8-1 (2-0 in shots on target) in the first half.

Toronto was incensed at an Aidan Morris challenge that left Piatti writhing in pain midway through the second half. Morris was cautioned on the play.

It was the third game in eight days for both teams.

Columbus made two changes with Sebastian Berhalter and Hector Jimenez coming in for Fatai Alashe and Milton Valenzuela.