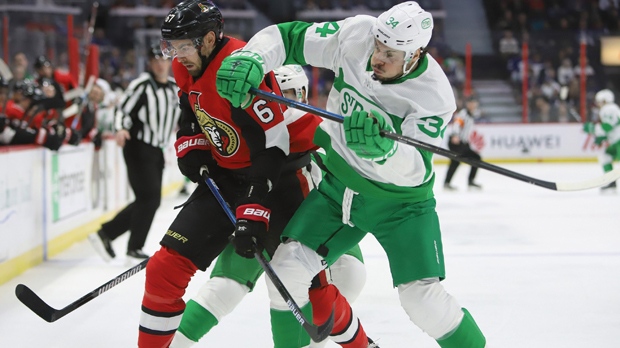 Morgan Rielly and John Tavares scored for the Leafs (43-24-5), who have lost three of their past four games. Garret Sparks stopped 38 shots.

The Leafs should have felt right at home at the Canadian Tire Centre with most of a season-high crowd of 18,607 cheering for Toronto in the Battle of Ontario.

Trailing 4-1 to start the third, Toronto caught a break when both Zack Smith and Mark Borowiecki took minor penalties, giving the Leafs a two-minute, two-man advantage.

Tavares managed to score to cut the lead in half, but not until there were just 14 seconds remaining on the power play. Ottawa regained its three-goal lead shortly after as Duclair tracked a shot off the back boards and slid it past Sparks. Lindberg capped the scoring.

After playing a solid first period, the Senators continued to control much of the play and extended their lead to 4-1 after 40 minutes.

Ottawa made it a 2-0 game early in the second as Gibbons jumped on a Dylan DeMelo rebound and went to his backhand as he fell. Toronto cut it to 2-1 at 12:33 as Rielly put a shot over Nilsson's right shoulder for his 20th of the season.

With less than two minutes remaining in the second, Paajarvi scored his second of the night as he ripped a wrist shot past Sparks.

The Senators outshot the Leafs 17-9 in the first and led 1-0 off Ceci's sixth of the season. Christian Wolanin saw Ceci trailing and he wristed a shot past Sparks from the circle. Ottawa-born rookie Max Veronneau picked up his first NHL point on the play in his second game as a professional.