MONTREAL -- The Toronto Maple Leafs got power-play goals by Nazem Kadri and Tyler Bozak to open the lockout-shortened NHL season with a 2-1 victory over the Montreal Canadiens on Saturday night.

The Leafs went 2 for 5 with the man advantage and held Montreal to 1 for 5 on a Brian Gionta goal, and that was the difference in a sloppily played game from both clubs.

Montreal's anaemic power play was so disjointed for most of the game, it had many in the crowd of 21,273 chanting "We want P.K." in reference to holdout point man P.K. Subban.

But at 13:51 of the third period, Gionta banged in the rebound off a Rafael Diaz point shot with a man advantage to make it a one-goal game

The Leafs outshot the Canadiens 26-22.

Michael Kostka, playing his first NHL game at 27, earned an assist on Kadri's goal and was second only to defence partner Dion Phaneuf on his team in ice time in a strong debut performance.

The Canadiens dominated the early going but the Leafs took momentum when they scored on their first shot of the game at 4:51.

A Phil Kessel pass hit a skate and went to Kadri, who lifted the puck into an open side with goalie Carey Price moving the wrong way.

Montreal's Tomas Plekanec was off for unsportsmanlike conduct after spraying goalie Ben Scrivens with ice when Bozak made it 2-0 at 8:12 of the second frame. A Kessel rebound went into the slot for the Leafs' centre to lift over Price's glove.

A pre-game ceremony saw Canadiens legends including Henri Richard and Yvon Cournoyer descend from the seats with a torch, which was passed on to 1950s and 1960s great Jean Beliveau, who finally gave it to current captain Brian Gionta to carry out to centre ice.

Top prospect Galchenyuk saw limited action on the second line and showed flashes of talent but was dropped to the third unit for the final period.

Before the game, Toronto named Clarke MacArthur and Joffrey Lupul as alternate captains.

The Leafs have their home opener Monday against the Buffalo Sabres. 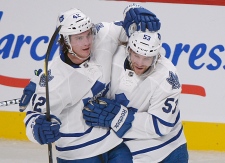 Players from the Montreal Canadiens and Toronto Maple Leafs warm up prior to their season opener at the Bell Centre in Montreal, Saturday, January 19, 2013. THE CANADIAN PRESS/Graham Hughes.