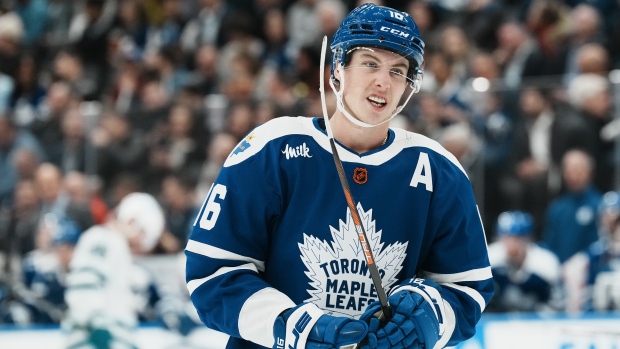 TORONTO - Pierre Engvall scored with 2:27 left in regulation as the Toronto Maple Leafs defeated the San Jose Sharks 3-1 on Wednesday.

Auston Matthews also scored for Toronto (15-5-5), which got 23 saves from Ilya Samsonov.

The 25-year-old is the 23rd player in NHL history with a point streak of at least 18 contests. Marner entered with six goals and 17 assists during his 17-game stretch.

Toronto, which was coming off a four-game road sweep of New Jersey, Minnesota, Pittsburgh and Detroit, improved to 8-0-2 over its last 10 games and 11-1-4 over the last 16.

Engvall fired home his third goal of the season off a rebound after the Sharks turned the puck over in the neutral zone.

Marner then had two chances at the open net before finally burying his eighth with 1:11 left in the third for his record-tying point that was saluted by the crowd at Scotiabank Arena.

Toronto went to its third power play of the night with just over five minutes left in the third period where not much was happening for either team, but Dell made a couple of huge saves on a scramble early in the man advantage before Engvall won it.

The Leafs have largely been fine minus their injured top-3 defencemen - Morgan Rielly (knee), T.J. Brodie (oblique) and Jake Muzzin (neck) - but were lucky to get out of the first period unscathed despite giving up three breakaways at two dangerous odd-man rushes.

Toronto took a 1-0 lead at 4:19 of the second when rookie Mac Hollowell, elevated from the AHL with the big club missing more than US$18-million worth of talent on its blue line, found Matthews with a slick slap pass for him to redirect his 12th.

San Jose responded at 7:26 when Logan Couture shook a Hollowell check behind the net and fed Nieto in front for his sixth against Samsonov, who returned to the lineup after missing the last 12 games with a sore knee.

The Leafs had a pair of power plays later in the period, but couldn't find the range against Dell, who made his first appearance of the season with James Reimer (undisclosed) out injured and Kaapo Kahkonen getting the night off following the Sharks' 4-0 victory in Montreal on Tuesday.

The goaltender signed a one-year contract with Toronto in October 2020, but was claimed by New Jersey on waivers in January 2021 before ever playing a game for the Leafs.

Dell spent last season with Buffalo before inking a deal to return to San Jose, where he played from 2016 through 2020.

The Leafs held a 21-second moment of silence for franchise icon Borje Salming, who was living with ALS, or Lou Gehrig's disease, and died last week at 71.

All proceeds of the team's reverse retro jerseys sold Wednesday will go to ALS Action Canada.

The sweaters worn by Toronto players against San Jose are set to be auctioned off in Salming's memory for the charity.

The Hall of Fame defenceman, who wore No. 21 throughout his sparkling career, was at Scotiabank Arena earlier this month as part of two emotional on-ice tributes.

Toronto forward Calle Jarnkrok suffered a groin injury in the second period and did not return.

Sharks: Visit Ottawa on Saturday in the third game of four straight away from home.