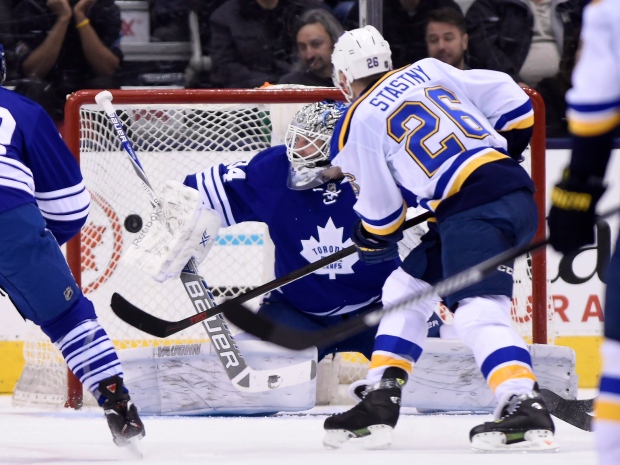 TORONTO - Dion Phaneuf rocked T.J. Oshie with a thunderous hit, and that wasn't even close to the biggest beating at Air Canada Centre on Saturday night.

The Toronto Maple Leafs tried to take it to the St. Louis Blues but were on the wrong end of a 6-1 blowout at the hands of a potential Stanley Cup contender. The loss was the Leafs' 28th in their past 35 games.

The Blues toyed with the Leafs from the drop of the puck and never seemed to let them have it. St. Louis swarmed, scored and out-classed Toronto at every turn. Neither starting goaltender Jonathan Bernier (three goals on 17 shots) nor backup James Reimer (three goals on 27 shots) stood a chance.

Returning home for their first game after the trade deadline, Leafs players talked about how much they had to play for: some for contracts and jobs and others for teammates, the Leafs logo and whatever else. If they were motivated, it was no match for the relentless Blues' talent and depth.

Many of the 19,108 fans in attendance for one of Toronto's worst routs of the season gave a Bronx cheer when Richard Panik registered the Leafs' first shot more than halfway through the first period. St. Louis had nine at that point, and it didn't get much better.