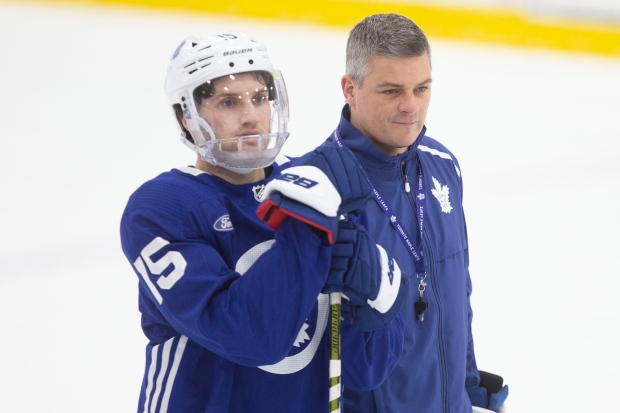 Kerfoot was suspended for two games by the NHL after his illegal hit on Johnson in the second period of Toronto's 5-3 win in Colorado on Saturday. Kerfoot cross-checked Johnson from behind and sent him crashing into the boards behind the Avalanche's goal.

“First and foremost, I think I'm disappointed in myself. It was obviously a bad play,” said Kerfoot, who was assessed a minor penalty for boarding on the play. “I know Johnson well and I just hope he's all right. I hope he doesn't miss any time or anything like that.

“I feel terrible about the incident. Obviously, did not mean to do it by any means. It's a bad spot on the ice and something I shouldn't be doing.”

Kerfoot and Johnson were teammates in Colorado, starting with the 2017-18 season when the forward joined the team as a free agent out of Harvard University.

“I'm close friends with him and don't mean to hurt him by any means or put him in a vulnerable position like that,” Kerfoot said after the Maple Leafs practised in Toronto. “The feeling in the moment is that you feel bad, you don't want to see someone fall into the boards like that and then after the fact that it's someone you know, that you're close with, you always feel bad, but it does make it a little worse.”

Kerfoot was traded to Toronto on July 1 along with defenceman Tyson Barrie and a sixth-round pick in the 2020 NHL draft in exchange for veteran forward Nazem Kadri, defenceman Calle Rosen and a third-round pick in 2020.

Three days later he signed a four-year, US$14 million contract with the Maple Leafs worth an average annual value of $3.5 million.

Kerfoot, who had no prior disciplinary history with the league, will forfeit US$37,634.40 in salary and will miss Toronto's upcoming road games Wednesday in Detroit and Friday in Buffalo.

“Knowing the type of player Kerfoot is, he recognizes he made a mistake on that particular play and he's been pretty apologetic,” Maple Leafs head coach Sheldon Keefe said. “The league had their say and we'll move on.”

Kerfoot has five goals and three assists in 22 games this season. He will be eligible to return when Toronto hosts the Sabres on Saturday.

“I saw (Johnson) after the game and apologized,” Kerfoot said. “Obviously, there's not much you can say. You can apologize all you want but it's something you shouldn't be doing on the ice.”

The No. 2-goalie spot has been an issues the last two seasons for Toronto.

Former head coach Mike Babcock insisted starter Frederik Andersen play the front half of back-to-backs regardless of the situation. Hutchinson was 0-4-1 this season for the Leafs, while Kaskisuo got bombed 6-1 in his only NHL appearance on Nov. 16 - the fifth of six straight losses that would spell the end for Babcock.

With the Leafs set to play a back-to-back against Buffalo on Friday and Saturday, Keefe was asked his view on the matter.

“My position on it is that I don't think ... I have one position,” he said. “Each situation is unique and we will look at each situation as that and make an appropriate decision.”

This report by The Canadian Press was first published Nov. 25, 2019.