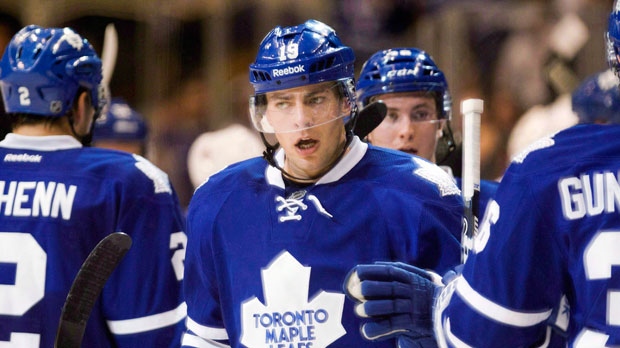 Coach Randy Carlyle announced the changes Saturday morning ahead of the Leafs' season-opening game against the Montreal Canadiens.

He said Jay McClement will step in to wear an A whenever Lupul or MacArthur miss a game.

"It was exciting," said MacArthur. "You want to try to lead and do what you have to do and if you get recognized like that it's an honour.

"I'll just try to continue to do the same thing I've been doing."

Lupul was a logical choice as a veteran, first-line player.

"It's going to come from everyone," he said. "As my career's gone on I think I've developed more and more leadership qualities, but it's going to be a team effort."

They replace centre Mikhail Grabovski and defenceman Mike Komisarek, who each wore an A last season.

"They're both leaders," Phaneuf said of his new assistants. "It's great to see them with letters, but the leadership group is more than just the guys that have the letters.

"It's about every guy leading in his own way. That's the motto in our room."

A few thousands fans braved a snowstrom to watch free game-day skates for both teams.

As loud as they cheered the Canadiens, the Leafs were booed as the NHL's oldest rivalry resumed.

Ben Scrivens left the ice first, which indicates he will be Toronto's starting goalie ahead of James Reimer.

Carey Price will be in the net for Montreal.

Price missed practice on Friday after tweaking a groin in an intrasquad game this week. Coach Michel Therrien said the day off helped have Price ready for the opener.

Centre Tomas Plekanec, who has been bothered by sore ribs, tested them in the skate and found he was able to play.

Plekanec has 18-year-old Alex Galchenyuk on his line along with captain Biran Gionta. Galchenyk, drafted third overall, was to make his NHL debut. Plekanec's return bumped winger Brandon Gallagher from the lineup. He also hoped to play his first game.

"He'll play with Plekanec and Gionta, who are two good leaders," Therrien said of Galchenyuk. "We talked about surrounding him with players who can help him.

"But you don't want to put too much (pressure) on him. You have to let him play. I'm not worried."