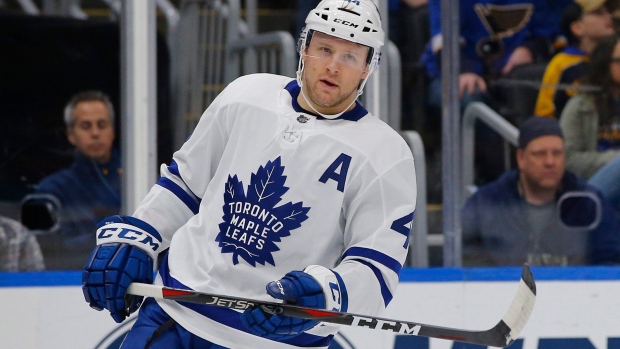 Toronto Maple Leafs' Morgan Rielly looks on during the first period of an NHL hockey game against the St. Louis Blues, Saturday, Dec. 7, 2019, in St. Louis. THE CANADIAN PRESS/AP/Billy Hurst

TORONTO - The Toronto Maple Leafs announced Thursday defenceman Morgan Rielly and a staff member have been placed in the NHL's COVID-19 protocol, while two Winnipeg Jets and a team employee have also been added to the growing list.

The Leafs now have a total of 12 players - including captain John Tavares and goaltender Jack Campbell - in isolation along with head coach Sheldon Keefe, two assistants, and four other members of the organization.

The Jets said forwards Andrew Copp and Kristian Vesalainen have entered the protocol along with a member of the club's support staff. Those additions mean all seven Canadian teams currently have players sidelined due to the coronavirus.

Four contests originally scheduled for Wednesday and 15 for Thursday are among the 45 postponed since Dec. 13 due to pandemic-related concerns.

The league is scheduled to resume play with 14 games Monday, including Toronto at Columbus and Minnesota at Winnipeg, although more postponements are possible with a number of clubs dealing with multiple COVID-19 cases.

This report by The Canadian Press was first published Dec. 23, 2021.