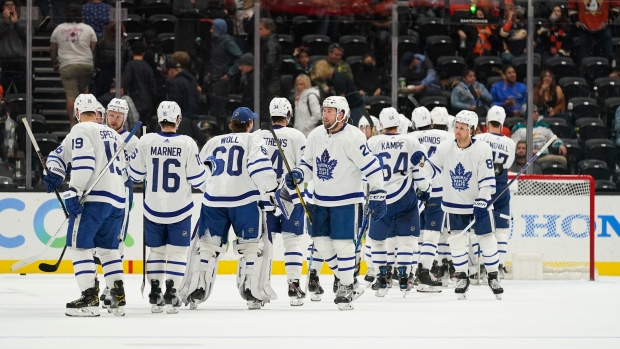 ANAHEIM, Calif. (AP) - Michael Bunting, Alexander Kerfoot and William Nylander each had a goal and an assist, and the Toronto Maple Leafs tied a franchise record with their seventh straight road victory, beating the Anaheim Ducks 5-1 on Sunday night.

Auston Matthews scored for the third consecutive game, Wayne Simmonds had a goal, and Jack Campbell made 37 saves for the Maple Leafs.

Toronto has not lost away from home since dropping its first three road games. The Maple Leafs swept a four-game trip that started against the New York Islanders and ended by outscoring the three California teams 15-4.

Hampus Lindholm scored and John Gibson made 26 saves for the Ducks. Anaheim has lost four of five following an eight-game win streak.

Scoring chances were hard to come by until Matthews tipped in T.J. Brodie's shot at 7:48 of the second period to put the Maple Leafs in front.

Bunting made it 2-0 with 8:57 left in the second, burying a one-timer into an open net. Jake Muzzin's long pass from his own zone to Mitchell Marner sparked a 3-on-1 rush, which ended with Bunting's sixth goal of the season.

Bunting has two goals and four assists during a four-game point streak.

Toronto's forecheck forced a turnover in the offensive zone and Kerfoot scored 13 seconds into the third for the three-goal cushion.

Lindholm jammed in a rebound from close range to cut the deficit to 3-1 at 7:26, with Ryan Getzlaf picking up his 19th assist. The Ducks piled on the pressure, but Campbell made the necessary saves to quash their momentum.

Nylander added an empty-netter with 3:07 remaining to make it 4-1, and Simmonds beat Gibson 15 seconds later for the 5-1 final.

NOTES: Matthews has three goals and one assist during a three-game point streak. ... F Kyle Clifford started his second stint with Toronto after being acquired in a trade from St. Louis on Nov. 16. Clifford had one goal and two assists in 16 games with the Maple Leafs in 2019-20. â€¦ Maple Leafs F Jason Spezza played in his 1,200th career game. â€¦ Toronto F Ondrej Kase missed his second straight game because of an upper-body injury.