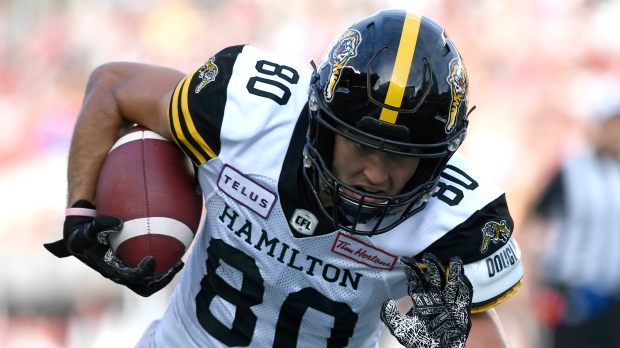 Hamilton Tiger-Cats' Caleb Holley (80) makes a touchdown against the Ottawa Redblacks during second half CFL football action in Ottawa on Saturday, Aug. 17, 2019. THE CANADIAN PRESS/Justin Tang

OTTAWA - No one can blame Rick Campbell for being frustrated with his football club.

The Ottawa Redblacks head coach couldn't hide his feelings following another loss, this one a 21-7 defeat against the Hamilton Tiger-Cats on Saturday.

Ottawa (3-6) is now 1-6 in its last seven after opening the year with back-to-back wins.

“There are a lot of good players and coaches and good people that are trying and working hard, but we are certainly not doing the fun part of the game and the necessary part of the game, which is making plays and scoring points. There's definitely stuff to work on too in our defence and special teams, stuff to clean up.”

The Tiger-Cats (7-2) earned their fourth win in its last five outings to comfortably sit atop the East Division standings and share the best record in the CFL with the Winnipeg Blue Bombers at the halfway point of the season.

“We didn't play our cleanest game, but we found a way to win,” said Hamilton head coach Orlondo Steinauer. “We hung in there. We found a way to make plays when we needed to.”

Redblacks kicker Lewis Ward saw his record field-goal streak of 69 come to an end when he missed a 31-yard attempt wide right in the first quarter.

Ward's record is 30 more than the next longest streak and an impressive feat for the second-year kicker. Ward hadn't missed a field goal since last year's season opener.

“It really is remarkable,” said Campbell of the achievement. “I was saying as it was going on that I don't think you'll see something like that happen again where you just smash a record so badly like that.”

Dominique Davis finished 20 for 40 for 238 yards, while back-up Jonathan Jennings, who played part of the second quarter, was 2 for 6 for 31 yards.

If not for a couple big passes in the second half, Davis's numbers could have been much worse.

“I started off slow and couldn't really get anything going and that's why coach Campbell decided to sit me for those couple drives,” said Davis.

“He let me breathe for a few seconds and see what's out there and watch from the sideline and we did some good things second half, but we still couldn't get in the endzone. We've just got to find a way to finish.”

Once again the Redblacks fell short in time of possession and needed to rely on their defence. The defence held off Hamilton in the first half as Antoine Pruneau intercepted a Dane Evans pass in the end zone and later stopped Hamilton deep in the red zone forcing the Ticats to settle for a field goal.

DL Ettore Lattanzio admitted it's tough not to feel some frustration as the offence sputters, but says it's crucial for the team to stand united through this stretch.

“The worst thing you can do as a team is start pointing fingers,” Lattanzio said. “We want to win, we don't want to lose.”

Evans was 24 for 39 for 299 yards with one touchdown and two interceptions.

“As an offensive unit we played well in spots and I thought the good thing we did was move the ball,” Evans said. “Obviously we just need to be better in the green zone and that starts with me just taking care of the ball.”

The Tiger-Cats scored the game's first touchdown as David Watford had a one-yard run to take an 11-1 lead early in the third.

Ottawa finally gave fans something to cheer about when Davis connected with Dominique Rhymes for a 47-yard pass, but settled for a 26-yard field goal to make it 11-4.

The Redblacks caught a break when Anthony Cioffi intercepted Evans in the end zone. A penalty was called for pass interference, but Ottawa challenged and upon review it was waived off.

Ottawa kept clawing its way back and made it 11-7 early in the fourth after Ward connected on a 40-yard field goal.

Hamilton took control midway through the fourth after Jaelon Acklin was able to run in an 11-yard TD.

The Redblacks then had a miscommunication after Davis tried to make a lateral pass to Caleb Holley. Holley got a hand on it, but didn't realize it was a live ball after it dropped and the Tiger-Cats were able to regain control at Ottawa's 17. Three plays later they kicked a 21-yard field goal to take a 21-7 lead.

A 4-1 Tiger-Cats lead at the break made for a less than exciting first half.