Local prospects Houstan, Nembhard keen on Raptors, but will they be available? 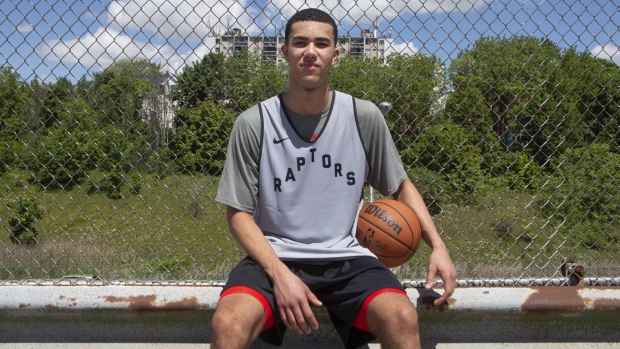 TORONTO - Local NBA prospects Caleb Houstan and Andrew Nembhard would cherish a chance to play for their hometown Raptors, but it remains to be seen if the guards will be available when Toronto makes its pick at the upcoming NBA draft.

The Raptors make their only selection early in the second round, 33rd overall, at the 2022 draft at the Barclays Center in Brooklyn on June 23. Toronto surrendered its first-round pick, which turned out to be 20th overall, when it acquired Thad Young from the San Antonio Spurs near last season's trade deadline.

Mock drafts have Houstan and Nembhard pegged between 25th overall and the first choice in the second round.

“I feel so grateful to be on this (Raptors) jersey,” Nembhard said after he and Houstan worked out for the Raptors brass at the club's practice facility, the OVO Athletic Centre, on Friday.

“You don't take this for granted. I'm thankful for the opportunity and feel very blessed.”

The rise of the Raptors and their 2018-19 NBA championship season helped shape the basketball desire of the 19-year-old Houstan and 22-year-old Nembhard as they grew up in the nearby communities of Mississauga and Aurora, respectively.

“Me and my brother (Devan) stayed up later than we should have to watch most of the games,” Houstan said. Devan, a defensive lineman, has committed to play football at the University of Notre Dame in the fall.

“The Raptors mean everything,” added Nembhard, whose brother Ryan plays at Creighton University. “When I was real, real young, basketball was at a point where it wasn't that important (in Toronto). You could see the growth and the love for the Raptors grow, especially with that championship recently.”

Both know Raptors head coach Nick Nurse because of their links to the national team program. Houstan helped Canada win a bronze medal in the 2021 FIBA Under-19 championship in Riga, Latvia.

“That's my guy, a great dude, rookie of the year,” Houstan said. “He was killing it. I watched him all year, and I was really proud of him.

“He's a good person to be around, on and off the court.”

At Montverde, Houstan and Barnes would talk about Toronto. Both families are from Jamaica, and Houstan would talk about the different slang terms used in Toronto's large Jamaican community.

The Raptors need to add depth at the guard position, and Houstan and Nembhard fit into the Raptors preference for versatile players.

Houstan declared himself for the NBA draft after only one season at the University of Michigan. He started 34 games, averaged 10.1 points per game and shot 35.5 per cent from beyond the three-point arc.

Nembhard transferred to powerhouse Gonzaga after two seasons at the University of Florida. Gonzaga went undefeated in 2020-21 season but lost in the NCAA final to Baylor.

Nembhard and Gonzaga were eliminated in the third round in 2022, the same round for Houstan and Michigan.

Nembhard made 32 starts for Gonzaga last season, averaging 11.8 points per game and shooting 32.3 per cent from three.

“I learned how to play better with good players, move off the ball and be efficient in my limited touches,” Nembhard said when asked about his decision to wait until this spring to declare for the NBA draft.

“I also improved my jump shot. You saw my numbers increase and fixed some of my mechanics. I saw growth there, and I saw growth in my body.”

Nembhard turned heads at the NBA combine in Chicago last month when he scored 26 points and 11 assists in a scrimmage. But he and Houstan don't get wrapped up in mock drafts or draft rankings.

“I don't have social media, so it doesn't make it too hard,” Houstan said.

“You're going to find out on draft night.”

Nembhard added, “You want to focus on yourself and control what you can control. The biggest thing is you only need one team to like you, not all 30.”

This report by The Canadian Press was first published June 10, 2022.