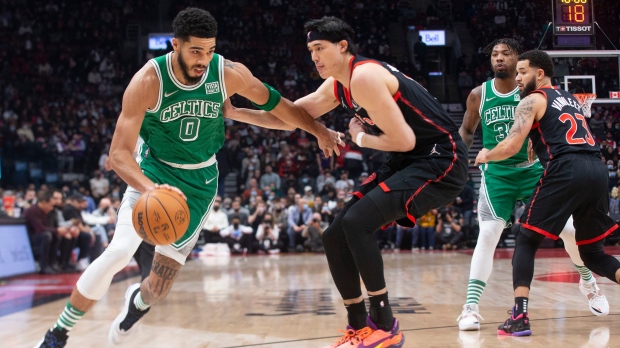 On Sunday, it was a 109-97 loss to the visiting Boston Celtics, despite being back in the friendly confines of Scotiabank Arena finally after a six-game road trip.

Fred VanVleet, who led the Raptors with 27 points, was asked how he can master cohesion with a revolving door of teammates.

“Just working,” VanVleet said, studying the box score after the loss. “It probably felt how it looked at times.”

Marcus Smart scored 21 points to lead the Celtics (11-10), in the Raptors' first game of seven in a row at home - Toronto's longest homestand of the season.

Barnes was one of the bright spots on the night, his shooting evolution on display when he drilled three three-pointers within a three-and-a-half minute stretch in the third quarter.

Barnes, who's shooting has been a priority for Raptors staff since they drafted him fourth overall last summer, shot 4-for-9 from long distance. He believes it's the most threes he's attempted in a game since high school.

“I made seven threes in one game (in high school),” Barnes said.

The Raptors were home after a six-game road trip that saw them win just twice. They have been hit hard by injuries, losing OG Anunoby to a hip pointer just one game into the trip. He's now missed six straight. The Raptors were also without Gary Trent Jr. on Sunday, who sustained a deep calf bruise in Friday's loss at Indiana, and Khem Birch (knee swelling).

Trailing 84-78 in the fourth quarter on Sunday, Mykhailiuk scored five straight points to pull Toronto to within a point, but Smart had a pair of three-pointers as part of a 14-2 Celtics run for a 13-point lead with 6:21 to play.

When Josh Richardson stole the ball off Barnes and scored with two-and-a-half minutes to play, fans headed toward the Scotiabank Arena exits.

“I thought the guys played really hard,” he said. “Some of the guys that we haven't seen that much of, Yuta (Watanabe), Isaac (Bonga), obviously Justin (Champagnie), I thought they went in there and did a good job. They tried pretty hard, there's just a couple of things you can't overcome there.”

The Celtics paraded to the free throw line 31 times to just 16 times for Toronto.

Asked about the referees' whistle favouring the visitors, VanVleet said “I promise if you write about it I will not be mad.

“But unless unless you have $25,000 to spare, I'm gonna stay away from officiating comments other than to say it was a tough night for us on that end of the whistle.”

Neither team led by double digits through the first half. The Raptors shot a horrible 4-for-13 from three-point range in the first quarter, but managed to stay within four points of Boston, and trailed 27-26 to start the second.

Boston opened the second quarter with an 8-0 run to take a nine-point lead, but the Raptors battled back to within a point with a solid stretch that saw Watanabe drill a three-pointer, then a steal by Barnes, who launched a court-long pass to a sprinting Siakam who finished with a thunderous dunk. Toronto trailed 54-51 at halftime.

Barnes had three three-pointers and 12 points in a third quarter that saw the Raptors tie it up six times.

Prior to tipoff, the Raptors announced veteran guard Goran Dragic has left the Raptors due to a personal matter. GM Bobby Webster said in a statement that the 35-year-old, acquired in the deal that saw Kyle Lowry leave for Miami, had the full support of the club. Dragic has been used sparingly in favour of the team's developing young guards such as Trent Jr. and Dalano Banton, appearing in just five games.

“Goran is, first of all, a really good dude,” Raptors coach Nurse said. “Extremely professional, very wise with all his experience internationally and all his years in the NBA. He's an enjoyable guy to be around and to coach.”

The Raptors finish out the calendar year with 12 of 15 games at home. Next up is the Memphis Grizzlies on Tuesday.