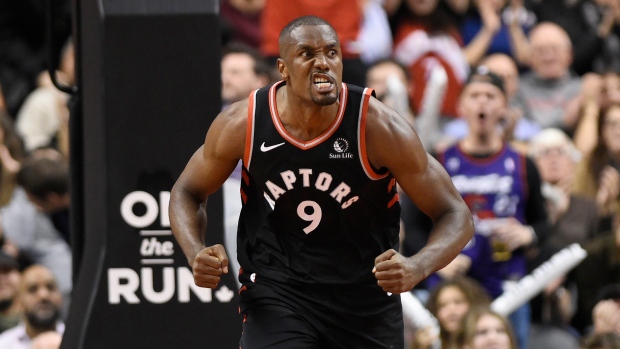 Toronto Raptors forward Serge Ibaka (9) reacts after his slam dunk on the Sacramento Kings during second half NBA action in Toronto on Wednesday, Nov. 6, 2019. THE CANADIAN PRESS/Nathan Denette

TORONTO - Kyle Lowry had 24 points, Pascal Siakam had 23 points and 13 rebounds, and the Toronto Raptors held off a late Sacramento surge to defeat the Kings 124-120 on Wednesday.

Serge Ibaka had 21 points - 10 in the fourth quarter alone - for the Raptors (5-2), who remained perfect at home (4-0). OG Anunoby added 18 and Marc Gasol and Fred VanVleet chipped in with 12 points apiece.

Harrison Barnes had 26 points, Buddy Hield had 21, Bogdan Bogdanovic finished with 20 and De'Aaron Fox had 17 for the Kings (2-6).

Sacramento cut its deficit to three points early in the fourth.

A VanVleet layup put Toronto ahead by seven at 122-115 but Barnes kept the pressure on, hitting the Kings' 20th three-pointer with 1:11 to play to make it a four-point game.

Bogdanovic missed a three-pointer with 15 seconds left. Two missed free throws from Anunoby gave the Kings the ball once more but they couldn't capitalize.

Toronto led by 14 with three minutes left in the third quarter when an emphatic dunk from Ibaka put them up 91-77, but the Kings put the pressure on late and Toronto ended the quarter up 95-88.

A three-pointer from Lowry gave the Raptors their first lead at 19-17 halfway through the first quarter, and they led 36-23 after 12 minutes.

Sacramento shot just 33 per cent from the field in the first quarter, and that number dipped below 30 early into the second while Toronto capitalized to build a 15-point lead.

Sacramento improved as the quarter wore on, and a three from Bogdanovic cut the deficit to four points three minutes before halftime. Toronto fought back to take a 66-58 lead at the break.

The Kings had gotten off to a slow start to the season, dropping the first five games under new head coach Luke Walton. But they came into Wednesday on a two-game win streak.

Wednesday's game was Rana's first in his hometown of Toronto as an NBA coach.

The Raptors were coming off a loss to the Bucks in Milwaukee on Saturday night. Siakam scored a season-low 16 in that defeat.

NOTES: Toronto-born former Raptor Cory Joseph, who signed with the Kings in the off-season, was honoured with a video tribute in the first quarter. ... The Raptors embark on a five-game road trip beginning Friday in New Orleans. They play former teammate Kawhi Leonard and the L.A. Clippers in the third game of that trip next Wednesday.