Magic finally get a playoff game at home; OKC, Indy on ropes 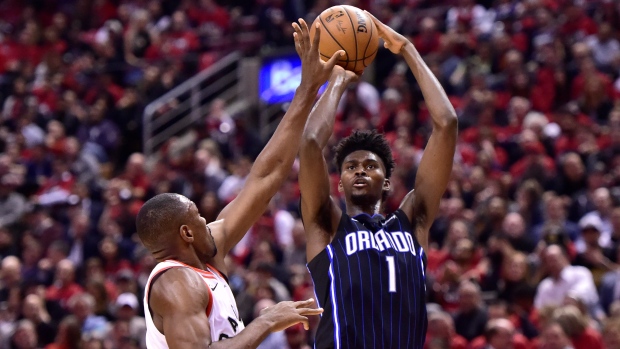 Indiana and Oklahoma City are seeking some home-court magic.

A trio of Game 3s in the NBA on Friday night -- Toronto at Orlando, Boston at Indiana and Portland at Oklahoma City -- have three very different story lines. The Magic got a split of their first two games with the Raptors, the Pacers are reeling after a late-game collapse in Game 2 left them trailing the Celtics 2-0, and the Thunder have seemed completely out of sorts as they've gotten into a 2-0 hole against the Trail Blazers.

"I still don't think we understand how good a team we can be when we play well," Magic coach Steve Clifford said.

Indiana had a great chance at getting a split slip away late in Game 2 at Boston. The Pacers have now lost 16 of their last 24 games overall, are looking at a fourth consecutive first-round ouster and have never won a series after losing the first two games.

Having said all that, the Celtics are leery of a letup.

"We know anything can happen in the playoffs," Boston guard Kyrie Irving said.

Oklahoma City is 2-14 this season when shooting 41 per cent or less, which includes both of the two games. Despite that, Thunder star Paul George said he has a simple message for teammates.

A look at Friday night's games:

KEEP AN EYE ON: Magic centre Nikola Vucevic has not been much of a factor so far, going a combined 6 for 21 in the first two games. Expect Orlando to run a lot for him early in an effort to get him in rhythm.

INJURY WATCH: Toronto may be getting Patrick McCaw (right thumb sprain) back for Game 3, which will bolster the bench. McCaw -- who played in 21 playoff games with Golden State over the last two seasons -- last played March 28.

PRESSURE IS ON: Still Toronto. All the Raptors did in Game 2 -- a blowout, no less -- was escape a bigger hole. Magic fans have waited nearly a decade for a playoff game. The atmosphere will be intense and Orlando is 13-1 in its last 14 games at home.

NEED TO KNOW: Boston is 36-1 all-time in best-of-seven series when it holds a 2-0 lead. The loss? Against Cleveland, in last season's Eastern Conference finals.

KEEP AN EYE ON: The Pacers' rebounding. They've been completely outplayed in that department, one of the reasons why they're in this 0-2 hole. Boston shot only 58 per cent from the line in the first two games, though obviously that didn't hurt the Celtics.

STAT QUIRK: Through all teams' first two games of this year's playoffs, Boston ranked 15th out of the 16 clubs in points per game. Luckily for the Celtics, Indiana was 16th.

PRESSURE IS ON: Myles Turner. The Pacers' centre has 13 points, 11 rebounds and three blocks -- not averages, totals -- in the first two games, and he's taken more 3-point tries than 2-point tries. He's got to come up big in Game 3.

NEED TO KNOW: Since losing in Oklahoma City on Feb. 11, Portland has gone 11-5 on the road. The Thunder didn't reach the 100-point mark in either of the first two games; the last time they didn't reach triple digits in consecutive games was back in mid-November.

PRESSURE IS ON: Westbrook. He took the blame after the Game 2 loss. It will be extremely interesting to see what Westbrook's floor plan is for Game 3.