Malcolm Miller, the first player back at Raptors' OVO Centre, happy to be back on floor 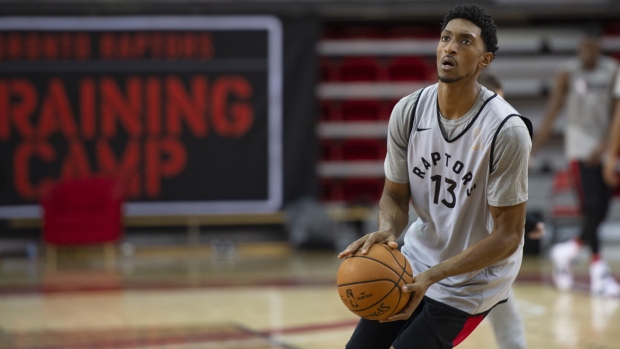 Toronto Raptors Malcolm Miller gets set to shoot during the Raptors training camp practice, Monday, September 30, 2019 at Laval University in Quebec City. Miller was the first Raptor to practise at the OVO Athletic Centre on Monday, when the team practice facility opened under strict guidelines. THE CANADIAN PRESS/Jacques Boissinot

TORONTO - It was unlike any NBA practice he'd ever attended. But two months to the day after the league closed shop due to COVID-19, Malcolm Miller was happy just to be back on the floor with a ball his hands.

Miller was the first player at the OVO Athletic Centre on Monday, when the Toronto Raptors' practice facility opened under strict guidelines.

“It definitely felt strange, I missed it,” Miller said on a conference call Wednesday. “It was a good experience just to have the basketball in your hands, feel the basketball and just get back to the game you love, even in a different format.”

While the league mandated four players could practise at one time beginning this week, the Raptors are permitting just one player and one coach. Miller is working with assistant Brittni Donaldson, who is required to wear a mask and gloves while on the floor. The mask makes it tough to breathe, she said, and the gloves leave her hands sweaty.

There's no overlap between one player leaving and the next arriving. Everyone who enters undergoes a health screening, including a questionnaire and fever scan. They have no access to anywhere but the court, and everything is cleaned between players.

“We just have to adapt and all these guys have at some point in their careers have been in a gym either alone or just with one other person so it's not a super unfamiliar setting for them or the coaches,” Donaldson said. “So just digging for that creative part of us from our past and implementing.”

The league suspended play on March 11, hours after Utah's Rudy Gobert tested positive for the coronavirus, and whether it will be able to resume is a big question mark. In a conference call with players last week. NBA commissioner Adam Silver raised the possibility of resuming without fans and potentially playing at a centralized site. Hurdles would include the need for testing.

About half the Raptors are in Toronto, and team GM Bobby Webster said last week that a player who wanted to return to Canada now would have to abide by the government's isolation rules.

Miller, who played in 25 of Toronto's 64 games this season, remained in the city after the shutdown because the situation was just as bad back home in Maryland. Miller has been lifting weights, doing yoga, and riding a stationary bike.

“It's just nice to be in the gym in whatever type of capacity it is, even if we don't have four or five rebounders or someone to set a pin down and someone to pass the ball,” he said.

The gym access, which is voluntary both for players and coaches, is a very small first step.

“We're definitely used to having either more coaches or more players to help with passing and rebounding and making the workouts a little more advanced,” Donaldson said. “It's simple now and we're keeping it basic and we're just trying to get the guys a rhythm back for those that want to be in the gym.”

How long would it take to get back in game shape if the season was to resume? Miller and Donaldson said it would be different for everyone, based on what equipment they had access to among other factors.

“(Conditioning) is the challenge going forward, there's no substitute for playing basketball,” Miller said. “You can run on the treadmill a lot, you can run a couple of sprints but actually getting that practice setting, five-on-five setting of basketball is definitely going be the toughest one.

“Basketball shape wouldn't be realistic until you can get on a five-on-five setting when you can play against people.”

Donaldson said the team, including its medical staff, will gauge how quickly to load up the work.

“I talk to Malcolm obviously a lot, almost between every drill, like, 'How do you feel? Are you sore?”' she said. “Whether it's working players back from an injury or taking a break during summer, we're used to this ramping-things-up-gradually process.

“Circumstances are a little different now, but it's not completely unfamiliar territory. We're feeling it out, playing it by ear, taking it day by day. To start, we're keeping it very basic, very simple.”

Miller, a 27-year-old forward, was pleasantly surprised to find his shot was decent. His ballhandling, however, “felt all over the place. It felt foreign dribbling.”

Donaldson, who at 27 is the youngest assistant in the NBA, was even feeling the effects of their first workout.

“I was a little sore on Day 2 and wearing the mask while running around rebounding and passing - I'm not in great cardiovascular shape to begin with and that added another layer,” she said. “But luckily Malcolm doesn't miss a ton so I'm not running around too much.”