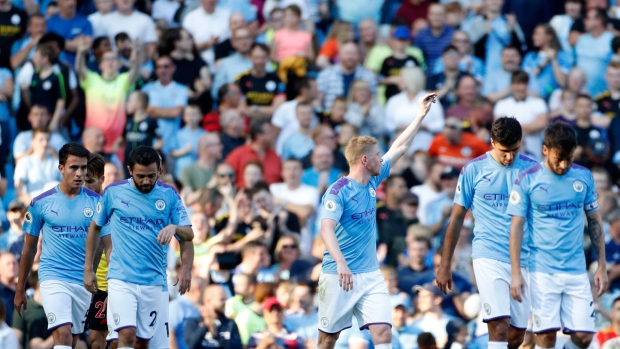 With his team leading 5-0 after 18 minutes and threatening Premier League scoring records, Manchester City manager Pep Guardiola sat with his arms folded in his dugout and might even have looked a little guilty.

Whether it's in the FA Cup final or just a run-of-the mill league game, Watford just does not know how to handle the most free-scoring team in England.

City ended up romping to an 8-0 win on Saturday, falling just short of the heaviest margin of victory in the Premier League era (since 1992) - Manchester United's 9-0 win over Ipswich in 1995.

Disappointingly for City's fans or those hoping to see records tumble, City only scored once in the final half-hour of an embarrassingly one-sided match. It was the best goal of the match, though - a powerful drive from De Bruyne into the roof of the net.

It was the perfect reaction from the champions to last weekend's surprising 3-2 loss at Norwich, the first defeat of their title defence which had left them five points behind Liverpool.

Consider this a warning to Liverpool, which visits Chelsea on Sunday.

In other matches, Tottenham conceded two goals after having one of its own ruled out by VAR for the most marginal of offside calls to lose 2-1 at Leicester.