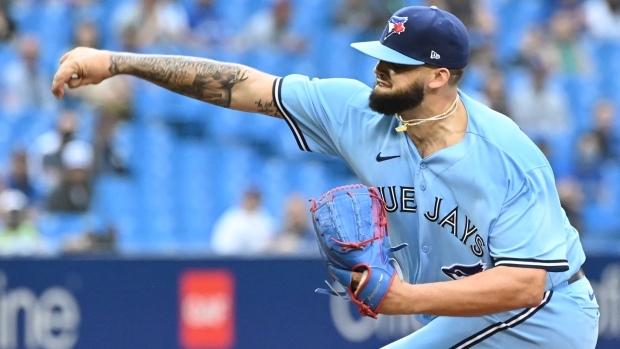 TORONTO - The Blue Jays celebrated a second win in two starts in their Rogers Centre return thanks to co-starring performances from rookie pitcher Alex Manoah and centre fielder George Springer.

Manoah tossed seven shutout innings while Springer smashed home runs in his first two at-bats in Toronto's 4-0 victory against the Kansas City Royals on Saturday. The Blue Jays arrived back home in Toronto on Friday after 22 months away because of the Covid-19 pandemic, playing home games in Buffalo and Dunedin, Fla.

Manoah made a return of sorts, too. He injured himself two weeks ago, slipping on the rain-soaked steps of the Blue Jays dugout in Buffalo. He suffered a right-back contusion. He yielded only a pair of singles in his 89-pitch outing.

“It kind of got me pretty good,” Manoah said when asked about his fall. “It was a long couple of weeks, and I'm just so happy and so grateful to be back on that mound.

“Body felt really good; everything felt good. I was able to throw a lot of strikes and get the boys a win.”

The 23-year-old Manoah (3-1) knew he would be keyed up for his first Rogers Centre start. So he attempted to control his adrenaline with deep breaths. He didn't have the velocity he exhibited earlier in the season.

However, he still managed four strikeouts and retired 16 Royals in a row between Ryan O'Hearn's one-out single in the second inning and Hunter Dozier's two-out base hit in the seventh.

“We thought he was going to be rusty,” Blue Jays manager Charlie Montoya said. “But he was throwing strikes.

“This kid didn't have his best stuff, and he still can get you out.”

If Manoah can continue to chip in as he did on Saturday, the Blue Jays should have a scary starting rotation with their top four pitchers, led by Robbie Ray, Hyun Jin Ryu and newcomer Jose Berrios. The latter was acquired from the Minnesota Twins in exchange for shortstop/outfielder Austin Martin and right-handed pitcher Simeon Woods Richardson on Friday.

Berrios, scheduled to start for the Twins on Friday, was expected to arrive at Rogers Centre on Saturday evening. Montoyo plans to start his new pitcher in the series finale on Sunday afternoon if he deems himself ready.

“I'll be waiting here for him,” Montoyo said in his post-game remarks.

The Blue Jays also had to wait for Springer to make an impact this summer. The free agent signed a six-year, $150-million US contract with Toronto last January. But a right-quadricep strain limited his playing time earlier this season.

He found his form in July. His first-pitch leadoff homer down the left-field line, for his 40th career leadoff round-tripper, and his third-inning two-run blast were his 10th and 11th home runs of the year. He now has gone 19-for-49 (.388) in his last 13 games with six doubles, six homers and 10 RBI.

“Obviously, this is where I wanted to play,” said Springer, who has reached base 50 times in his 34 outings in 2021. “This is home. For us to have a chance to come back here, to play in front of the fans, the atmosphere has been unbelievable the last couple of games. It's exciting.”

After Manoah departed, the Blue Jays received some substantial relief pitching from lefty Ryan Borucki and Adam Cimber. Borucki got the first two outs in the eighth inning, while Cimber closed down the Royals (45-58) with four straight strikeouts to end the game.