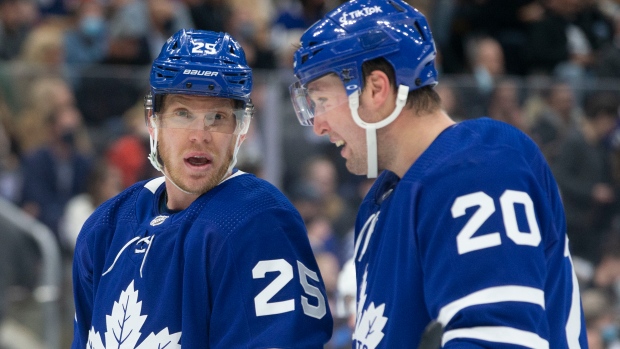 The Toronto Maple Leafs have added three more players to the NHL's COVID-19 protocol as an outbreak on the team that started in December continues to drag on.

The Leafs announced Friday that forwards Ondrej Kase and Nick Ritchie and defenceman Justin Holl have been added to the list.

The announcement comes two days after the Maple Leafs dropped a 2-1 road decision to the Arizona Coyotes, who are in the midst of a COVID-19 outbreak.

A total of 20 Maple Leaf players have entered the protocol since the team struggled through its outbreak last month.

Most of the players have since returned to action. Wingers Mitch Marner and Pierre Engvall, who entered protocol seven days ago, were the only other Maple Leafs out due to coronavirus concerns Friday morning.

The Maple Leafs practiced in Arizona on Friday before their upcoming game in St. Louis on Saturday.

This report by The Canadian Press was first published Jan. 14, 2022.