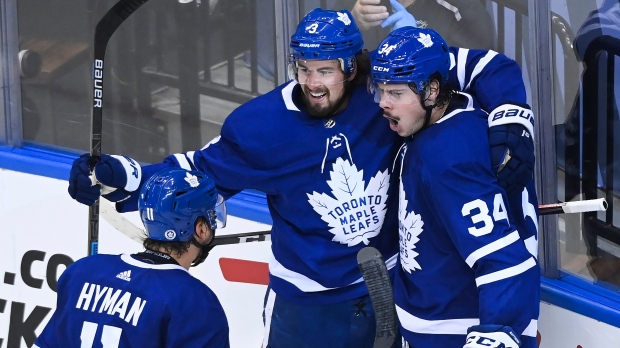 TORONTO - Auston Matthews scored late in the second period to finally solve Columbus goalie Joonas Korpisalo as the Toronto Maple Leafs defeated the Blue Jackets 3-0 on Tuesday to even their best-of-five qualifying round series at one game apiece.

John Tavares added an insurance goal in the third, while Frederik Andersen stopped 21 shots to record his first post-season shutout with Toronto, the eighth seed in the Eastern Conference as part of the NHL's 24-team restart to its pandemic-delayed campaign. Morgan Rielly added an empty netter with 42.6 seconds left.

It wasn't all good news for the Leafs, however, who lost Jake Muzzin to a scary injury late in the third period when the Toronto defenceman appeared to jam his neck after falling awkward into the back of Blue Jackets winger Oliver Bjorkstrand's leg while killing a penalty.

Muzzin tried to get up and appeared to be moving his extremities, but couldn't rise to his skates. He was attended to by a trainer before more medical personnel arrived on the ice. The bruising blue-liner was eventually taken off on a stretcher inside a silent Scotiabank Arena as both teams tapped their sticks.

With the Leafs coming at the Blue Jackets in waves, Matthews deftly redirected a Zach Hyman pass off the rush past Korpisalo's blocker on Toronto's 28th shot of the afternoon with exactly four minutes left in the second - a goal that would have blown the roof off Scotiabank Arena in a normal post-season encounter.

Instead, the players on the ice and bench made all the noise inside their fan-less home rink, which is playing host to the East teams as part of the Toronto hub because of COVID-19.

The goal sequence was one of the few where Blue Jackets defenceman Seth Jones wasn't out against Matthews, and the Leafs' star centre made them pay.

Before that goal, however, it looked like Toronto might never solve Korpisalo, who was lights out in his first-ever playoff appearance less than 48 hours earlier as Columbus employed its stingy defensive structure to perfection against the high-flying Leafs.

After outshooting the Blue Jackets 15-6 in the first Tuesday, Toronto continued to press in the second. William Nylander couldn't tuck his effort home at the side of the net on a power play with Korpisalo down-and-out before Tavares had two chances right in front, and another from the slot.

Leafs defenceman Justin Holl had golden opportunity pinching down, but Korpisalo was there again as Columbus barely touched the puck in the middle period.

Andersen was solid in making 33 saves in Game 1, but disappointed by the one he missed - an innocent shot off the rush from Cam Atkinson that proved to be the difference before a late empty-netter.

The Toronto netminder didn't have much to do Tuesday through the first 40 minutes, but had to be sharp with the teams playing 4-on-4 after Matthews finally solved Korpisalo. Blue Jackets defenceman Zach Werenski had a chance off the rush and Atkinson was there on the follow, but the Leafs held still a 29-12 edge in shots through two.

Columbus, which stunned the Presidents' Trophy-winning Tampa Bay Lightning in a first-round sweep last spring before losing stars Artemi Panarin, Matt Duchene and Sergei Bobrovsky in free agency, tried to push early in the third. But with Werenski caught down low in the offensive zone, Tavares, who had a rough Game 1, was sprung free on a break and beat Korpisalo under the blocker at 4:56.

Korpisalo kept his team within striking distance by stopping Matthews on a 2-on-1 break midway through the period, but the Toronto coasted from there, save for the Muzzin injury, to even the series 1-1.

The Leafs were once again the “home” team inside a frigid Scotiabank Arena on a muggy August afternoon, but with a 4 p.m. ET start - the second of three games at the venue Tuesday - they set up shop in the reconfigured media centre and not their usual locker room. The Blue Jackets, meanwhile, were in the Toronto Raptors' digs down the hall.

Leafs head coach Sheldon Keefe tweaked his top-6 forward group, with Mitch Marner joining Matthews and Hyman, while Nylander moved to the wing on the second line with Tavares and Ilya Mikheyev.

Toronto came out on its toes, with bruising winger Kyle Clifford steamrolling Dean Kukan early in the first - a hit that would have had the home crowd frothing at the mouth in normal times. The Columbus defenceman looked a little woozy and went to the room, but eventually returned. Werenski was then seen getting his hand taped on the bench as the Leafs picked up the physical play and intensity.

Notes: Pierre Engvall centred Toronto's fourth line in place of Frederik Gauthier. ... Toronto was third during the regular season with 159 goals at 5-on-5, while Columbus gave up the fourth-fewest at 183.

This report by The Canadian Press was first published Aug. 4, 2020