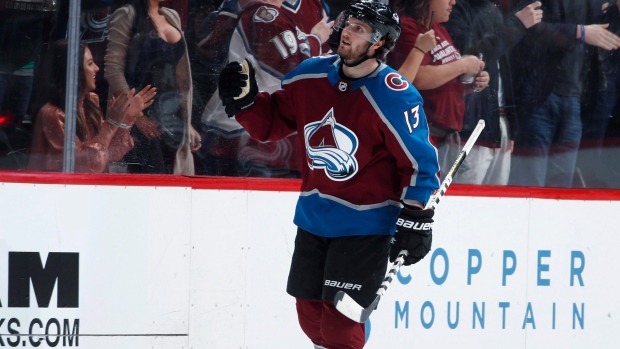 Colorado Avalanche center Alexander Kerfoot reacts after scoring a goal against the Edmonton Oilers in the second period of an NHL hockey game, Tuesday, April 2, 2019, in Denver. Alexander Kerfoot has an idea of what's coming. He grew up alongside Maple Leafs defenceman Morgan Rielly. THE CANADIAN PRESS/AP, David Zalubowski

TORONTO -- Alexander Kerfoot has an idea of what's coming. He grew up alongside Maple Leafs defenceman Morgan Rielly, and his father owns a professional soccer team.

But actually living in the spotlight that comes with playing hockey in Toronto is something entirely different.

"I don't think you can really prepare for the market until you get here," Kerfoot said. "I'll just try to embrace it."

He's going to have to.

The soft-spoken West Vancouver, B.C., product was enjoying Canada Day with family in the province's interior when a call came from Colorado Avalanche general manager Joe Sakic telling the forward that he and blue-liner Tyson Barrie had been traded to the Leafs for centre Nazem Kadri and minor-leaguer Calle Rosen.

Kerfoot, who turns 25 next month, played junior-A in the BCHL, starred at Harvard University and spent the last two seasons in relative NHL anonymity in Denver.

Those days are now over, and he knows it.

"It's obviously nothing like what I've experienced," Kerfoot said ahead of Thursday's Smashfest charity ping-pong event in Toronto. "It's going to be different from that side of things, but at the end of the day it doesn't impact how you play on the ice.

Kerfoot does know a thing or two about being the centre of attention, even if it's begrudgingly.

His dad, Greg Kerfoot, is majority owner of Major League Soccer's Vancouver Whitecaps. The elder Kerfoot, who made his fortune in computer software, guards his privacy closely.

He prefers to stay in the background of the club's operations and doesn't give interviews. There isn't even a biography for the reclusive Kerfoot on the team's website.

His son is well aware that won't fly in Toronto.

"It comes with the business. You get used to it," said Alexander Kerfoot, who signed a four-year, US$14-million contract extension as a restricted free agent with the Leafs after the trade. "I'm more than happy to make appearances, to talk to the media, to do whatever's asked of me. That's one of the great things about this market.

"I'm looking forward to that."

Kerfoot, who has registered 34 goals and 85 points in 157 NHL games, was selected in the fifth round of the 2012 draft by the New Jersey Devils out of the second-tier BCHL, but chose instead to go the U.S. college route.

He was a finalist for the Hobey Baker Award in his senior season at Harvard before signing with the Avalanche in 2017.

"Everyone has to make the right decisions for themselves," Kerfoot said of picking the Crimson over going pro. "I was primarily focused on academics to set myself up if hockey didn't work out.

"It was a great experience for me. I learned a lot, became a better player. I can't say enough good things."

That connection to Harvard, and not the trade to the Leafs, is what brought him to Toronto for Smashfest.

Former NHLer Dominic Moore organizes the event and also happens to be a Crimson alumni. He was living in Boston and practising with Harvard last fall waiting for an opportunity to continue his career when Kerfoot's younger brother -- a forward on the squad -- mentioned Alexander's ping-pong prowess and put the two in touch.

Smashfest, which sees NHLers compete in a tournament with hundreds in attendance, had raised more than $865,000 in support of research and awareness for concussions and rare cancers heading into Thursday's eighth edition.

"It's a great event for a great cause," Kerfoot said. "Dom reached out to me and I was happy to get involved."

Switching his focus back to the ice, Kerfoot said having off-season training partners Barrie and Rielly in the locker room should help make his transition to the Leafs easier. And the fact he and Rielly grew up playing in the same minor hockey association and remain close doesn't hurt either.

"Both of our dads went to school together, we grew up in the same area so the families are close," said Kerfoot, who has put up 43- and 42-point campaigns in the NHL to go along with two goals and three assists in 18 playoff contests. "It'll be pretty cool to play with him."

Kerfoot, whose family built an indoor rink on their property in Whistler, B.C., when he was a youngster, can play centre or on the wing and looks likely to start on the third line in Toronto.

"The Leafs talked to me about what they expect from me as a player, the type of game they want the team to play," he said. "But they haven't got into specifics.

"That'll come once we get to training camp."

And so will a new level of scrutiny.

"It's great to play in markets where fans are interested and there's exposure," Kerfoot said. "I'm just looking at it as a positive.

"Hopefully it works out well."