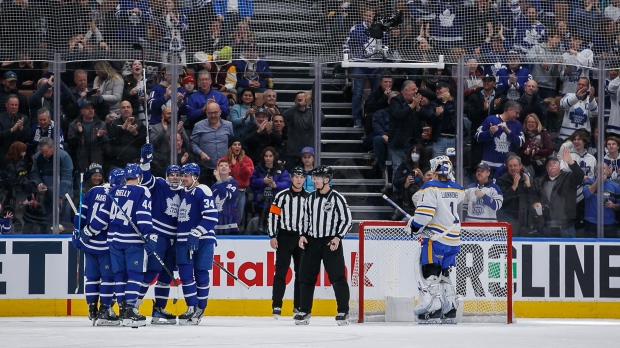 John Tavares (91) of the Toronto Maple Leafs raises his stick as he celebrates a goal in the first period of NHL hockey action against the Buffalo Sabres in Toronto on Saturday, Nov. 19, 2022. THE CANADIAN PRESS/Cole Burston

TORONTO - Mitch Marner had two assists - including a slick short-handed setup to cap a 3-0 first-period barrage - that pushed his point streak to 12 games as the Toronto Maple Leafs defeated Buffalo 5-2 on Saturday to extend the slumping Sabres' losing run to eight.

William Nylander scored twice, while John Tavares, with a goal and two assists, Calle Jarnkrok and Mark Giordano provided the rest of the offence for Toronto (10-5-4).

Matt Murray made 32 saves as the Leafs improved to 6-1-2 over their last nine.

Marner, who has three goals and 14 assists during his red-hot stretch, is just the second player in franchise history to record points in 12 straight contests multiple times, joining Lorne Carr (14 games in 1942-43 and 13 games in 1943-44).

The winger had a 13-game point streak last season.

Alex Tuch and Casey Mittelstadt replied for Buffalo (7-11-0), which hasn't earned a point in the standings since Nov. 2. Ukko-Pekka Luukkonen stopped 18 shots in his first start of the campaign after being recalled from the AHL with Eric Comrie sidelined due to a lower-body injury.

Toronto opened the scoring at 12:58 of the first when Marner's power-play shot went in off Tavares for the captain's 10th goal before Jarnkrok made it 2-0 at 17:27 with his fourth.

The Sabres went to the man advantage late in the period, but Marner raced the other way on a breakaway before dropping a pass back for Giordano. Tuch dislodged the net from its moorings in a desperate backchecking effort before the Toronto defenceman shot the puck over the goal line.

Giordano's first of 2022-23 was initially waved off - with Tuch assessed a delay-of-game penalty - but the sequence was ruled an “imminent scoring opportunity” following video review as the Leafs built a 3-0 lead in just 5:23.

Buffalo got one back on a power play at 10:01 of the second off a Tuch deflection for the winger's ninth before Murray, who picked up his first home victory in blue and white, held the fort on another Sabres man advantage.

Nylander restored Toronto's three-goal at 14:50 on a power play when he swept home his ninth from the crease and added another on a breakaway at 10:37 of the third to make it 5-1.

Mittelstadt rounded out the scoring with his fifth on a power play at 15:07.

The Mississauga, Ont., native said following Saturday's morning skate his biggest eye-openers have been the travel and congested schedule after suiting up roughly twice a week in the USHL and NCAA the last four years.

“I'm still adjusting,” Power said. “How I'm feeling, how much work I'm putting in, how much rest I'm getting.”

Sabres head coach Don Granato, who has Power on the first defence pair alongside Rasmus Dahlin, said the 19-year-old is like a sponge.

“Very good and consistent in learning and applying,” Granato said. “He absorbs what's happening and he acclimates and re-acclimates very quickly.”

The 24-year-old, who was selected 10th overall in 2016 by Colorado and has 400 NHL regular-season and playoff games under his belt, has three assists in 12 games this season.