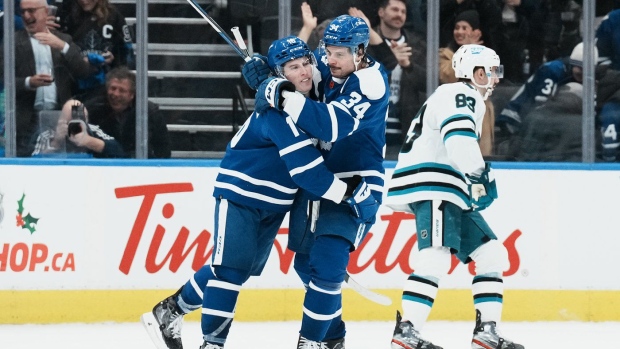 As the third period of Wednesday's game melted away with current Maple Leafs star Mitch Marner desperately seeking to extend his point streak to 18 contests, the franchise icon turned to his son, Ryan, and former teammate Jack Valiquette.

“Hey listen,” Sittler recalled telling them in a phone interview with The Canadian Press. “Score's 1-1. If the Leafs score, Mitch has got a chance of getting one in the empty net. If they don't score, it's tied and he'll get a chance in 3-on-3 overtime.

“Sure enough, it worked out.”

Marner flubbed two cracks at the empty net with Toronto leading San Jose 2-1 late in regulation before finally connecting on a third attempt to match the Leafs' all-time mark for consecutive games with a point - a record he now shares with Sittler (1977-78) and Eddie Olczyk (1989-90).

“Mitch is a great guy and a great player,” Sittler added. “It's fun to watch, and the team's doing well as he's doing it.”

Marner and the high-flying Leafs will look to keep it going Saturday on the road against Tampa Bay - the division rival that sent them packing last spring.

The Lighting battled back to win Game 6 of that first-round playoff series in overtime at Amalie Arena before also taking Game 7 in Toronto.

“You learn a lot about your team and learn a lot about yourself,” Leafs head coach Sheldon Keefe said following Friday's practice of falling to a club that won the Stanley Cup in 2020 and 2021 before losing last year's final to Colorado. “We did a lot of good things in that series. Not good enough to get it done in the end, but you still grow inside of that.”

“A team that's been at the top of the league,” Toronto sniper Auston Matthews added of the Lightning. “We're trying to get to that level and earn that kind of respect.”

The Leafs have also won six straight road games in regulation, but weren't thrilled with Wednesday's 3-1 home victory over San Jose as they pivot to the Lightning.

“There's a reason why they won back-to-back years and have gone to the Stanley Cup final three years in a row,” said Marner, who has seven goals and 17 assists during his point streak. “You know how they're gonna play - not give you a whole lot.

“Gotta work for your offence.”

The 25-year-old winger has been doing that on his red-hot run for surging Toronto, which has responded in spectacular fashion after a slow start.

“He's really, really rolling,” Matthews said. “A lot of fun to witness and be a part of.”

Keefe said Marner, who grew up in nearby Thornhill, Ont., and has at times been worn down by the pressure of suiting up for his hometown team, has learned to navigate life in the spotlight - including during this point streak.

“Part of the maturation process,” Keefe said. “You're seeing some of those results.”

Marner shared the moment of extending his streak to 18 games with his family and teammates Wednesday. He also received text messages from Sittler and Olcyzk before turning his focus to a Saturday victory.

And once again getting his name on the scoresheet.

“It was cool having those two legends reach out and congratulate me,” he said. “If you would have told me growing up that this would happen, I don't think I would have believed you.”

“The biggest thing is just no signs of panic or stress ... next-man-up mentality,” Keefe said. “Working closest with the defence, he's the guy that really has to embody that.

“There's a lot for him to manage there, but he's done an exceptional job.”

Robertson is still finding his way as a young player, but his older brother has already planted their family's flag at the top of the NHL stats page.

Dallas winger Jason Robertson, who's found the scoresheet in 17 straight contests, leads the league with 22 goals and sits second behind only Connor McDavid with 39 points.

The production might be a surprise to some, but not his younger sibling.

“That's his job,” said Nick Robertson, adding with a laugh: “Hopefully it can trickle down to me.”

This report by The Canadian Press was first published Dec. 2, 2022.