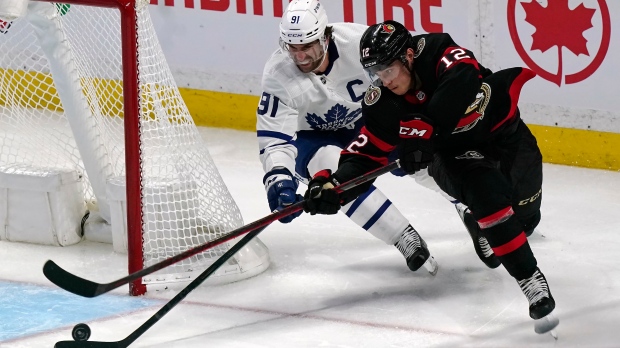 The Maple Leafs are only two games - played 24 hours apart - into their regular-season schedule.

An early trend, however, has already emerged. And it's one they want to nip in the bud.

Toronto came out flat in its home opener Wednesday, surrendering chance after quality chance to the Montreal Canadiens early in a first period that easily could have seen the visitors take a big lead if not for the standout play of Jack Campbell in goal.

The Leafs eventually got going and secured a 2-1 victory prior to boarding a plane headed for the nation's capital.

Hosting their opener, the rested Senators had an early push and, along with some fortunate bounces and Toronto mistakes, built a 3-0 lead after 20 minutes. The Leafs would again find ther groove - forcing a total of 46 saves out of Ottawa netminder Anton Forsberg - but fell short in a 3-2 loss.

“It's early in the year so let's not make too big of a deal, but you want to find your identity as a team,” Spezza, who's in his 19th season and scored against his old club in the third period Thursday, said of Toronto's dodgy openings in the wake of that defeat at Canadian Tire Centre. “Obviously we've had two slow starts.”

William Nylander said the Leafs knew they would need to be on their toes in the second of a back-to-back.

“The slow start is getting to us,” said the winger, who scored for the second straight night and has two of Toronto's four goals. “It's something we've got to work on.”

Head coach Sheldon Keefe disagreed with the assertion the starts Wednesday and Thursday were similar in nature. Montreal had grade-A opportunities left and right, he pointed out to reporters post-game Thursday, while Ottawa got some fortunate breaks in securing its lead.

“But it certainly wasn't the type of period that we wanted in terms of gifting them goals,” he said.

Leafs captain John Tavares added the circumstances of playing the second game in as many nights isn't an excuse: “Clearly we weren't good enough.”

“They came out with a lot of energy and excitement,” he said. “We knew coming out on the road, back-to-back, we'd need to play a smart game and get ourselves involved early. We didn't execute probably as well as we wanted to.

“We seemed to get our game going for good periods at a time and then we lost it during other periods.”

Spezza said Toronto, minus No. 1 centre Auston Matthews (wrist) for at least one more game as he recovers from off-season surgery, will examine the video to better understand how Ottawa and its youthful roster approached the Leafs when the teams tangle again Saturday at Scotiabank Arena.

“They pushed the pace and were flipping a lot of pucks out,” he said. “We weren't getting a good enough forecheck to begin - giving them too much time to make plays. Then we weren't breaking out clean and that led to us chasing the game.

“We just learn from it. They really blew the zone, pushed us back. I think we were a little bit caught in between early in the game. We'll be very prepared the next time we play.”

And that starts with the start.

“It'll definitely be a theme,” Spezza added. “It's something we don't want to make a habit of - starting slow.

“It is something that will be addressed.”