Maple Leafs not looking back ahead of Game 7, but ghosts of past failures remain 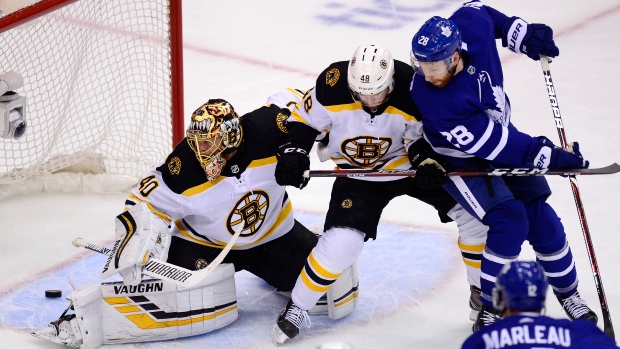 Boston Bruins goaltender Tuukka Rask (40) looks back as the puck goes into the net on a goal by Toronto Maple Leafs defenceman Morgan Rielly (not shown) as Bruins defenceman Matt Grzelcyk (48) and Maple Leafs right wing Connor Brown (28) battle in front of the net during first period NHL playoff hockey action in Toronto on Sunday, April 21, 2019. Toronto heads into the finale of a back-and-forth Eastern Conference quarterfinal with the Boston Bruins on Tuesday night with a firm belief. Ghosts of past playoff failures, however, still linger. THE CANADIAN PRESS/Frank Gunn

TORONTO -- Connor Brown and the Maple Leafs sent all the right messages ahead of Game 7 last year.

He insists this time they actually mean it.

Toronto heads into the finale of a back-and-forth Eastern Conference quarterfinal with the Boston Bruins on Tuesday night with a firm belief. Ghosts of past playoff failures, however, still linger.

And while just two players -- Jake Gardiner and the suspended Nazem Kadri -- remain from an even bigger collapse in Boston in 2013, many Toronto fans are still scarred from a meltdown that saw the Bruins become the first team in NHL history to win a Game 7 after trailing by three goals in the third period.

Up 3-2 in this year's first-round series, Toronto had a chance to finish Boston off in Game 6 at home on Sunday. The Leafs came out swinging, the Bruins responded, and kept their opponent at bay long enough to force another winner-take-all affair.

"We're a very confident group," Brown said post-game in an empty Leafs locker room. "We were saying it all last year, but now we really believe it to our core.

"We feel as if we're a group that can go deep."

Despite the most recent setback, Toronto has reason to optimistic.

While last year's series was close in that it went the distance, the teams are more evenly matched in 2019. Neither side has managed to win consecutive games -- Toronto trailed 2-0 and 3-1 last spring -- the Leafs have outscored the Bruins 13-11 at even strength, own a slight edge in puck possession at 5-on-5 and have out hit the Bruins 217-206.

Toronto has already won twice at TD Garden, including a disciplined, patient 2-1 victory in Game 5 where the Leafs had to wait until midway through the third period to break a 0-0 tie.

"We know how they play, they know how we play," Toronto defenceman Morgan Rielly said. "It really comes down to the commitment to do it right."

One area where the Bruins have had a clear advantage is on the man advantage.

Third overall in the NHL during the regular season, Boston is 7-for-16 on the power play in the series compared to Toronto's three goals on 14 chances.

That disparity was the difference in a Game 6 where the Leafs scored early only to watch as the Bruins struck twice up a man, although the first came off a scrambled draw in the offensive zone.

Toronto found some answers in neutralizing Boston on three opportunities in Game 5 and will need a similar effort in Game 7 as the franchise looks to advance to the second round of the playoffs for the first time since 2004.

"We understand what they do," Brown said. "It's time for us to stop having the breakdowns."

The Leafs have a different look this time around following the free-agent acquisition of centre John Tavares, the trade for defenceman Jake Muzzin and the continued growth of Auston Matthews, who has five goals in his last four games, and Mitch Marner. Toronto goalie Frederik Andersen, meanwhile, owns a .925 save percentage after being one of the weak links in the chain last year.

"It's a new set of circumstances," Tavares said. "It's a lot of guys who haven't been here, including myself."

"I'm not a big believer of living in the past," Leafs head coach Mike Babcock added. "I don't carry a lot of stuff around from the past at all."

Boston has also made changes, but a battle-tested core remains the backbone of their lineup. Patrice Bergeron, Brad Marchand, Zdeno Chara and Tuukka Rask have won the Stanley Cup and been to another.

With their team facing elimination on Sunday, Marchand scored twice and added an assist, Bergeron and Chara were their usual solid selves, and Rask did enough to keep the Leafs at bay late.

The Bruins know the history between the teams, too, but like the Leafs don't put much stock in the past.

"I don't think anybody has a mental advantage," Rask said. "Every season is a new season. If you end up playing the same team, so be it, but it's a new series, new game.

"We have a lot of experience in the room, but we still have to play the game the right way."

The Leafs' formula on Tuesday won't be much different.

"We're a group that wants to be on the ice in big moments," Brown said. "We won't be timid."