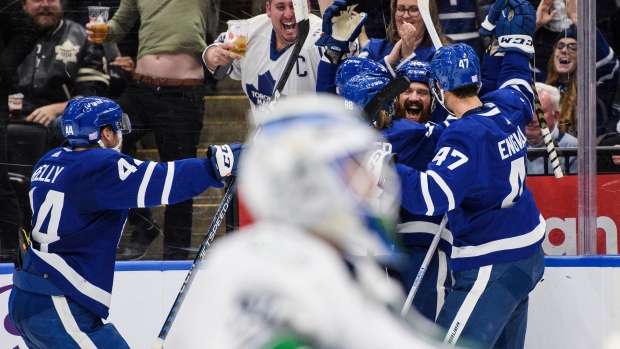 TORONTO - Jordie Benn scored the winner in his Maple Leafs debut as Toronto came back from an early 2-0 deficit to defeat the Vancouver Canucks 3-2 on Saturday.

Auston Matthews and Pierre Engvall had the other goals for Toronto (8-5-3).

Erik Kallgren made 28 saves in his second start in as many nights after the Leafs lost 4-2 at home to the Pittsburgh Penguins on Friday.

Bo Horvat and J.T. Miller replied for Vancouver (4-8-3). Spencer Martin stopped 32 shots for the struggling Canucks, who blew their sixth multi-goal lead of the season.

Down by that margin after a first period where they couldn't get out of second gear, the Leafs cut the visitors' lead in half when Matthews ripped his seventh of the campaign upstairs on a power play 1:46 after the restart.

Engvall then added his second on a scramble to tie it 2-2 at 6:27 as Toronto kept up the pressure before Benn, who injured his groin in pre-season and entered the lineup for the ailing T.J. Brodie, pinched down from his defensive position to score against his former team at 10:01.

Brock Boeser hit the post for Vancouver on a power play early in the third, and Kallgren snagged an Andrei Kuzmenko shot later in the period off a turnover, but the Canucks couldn't find a third goal to force overtime.

Vancouver opened the scoring at 3:41 of the first period when Horvat tipped his 13th past Kallgren, who made his eighth appearance of 2022-23 with Matt Murray (groin/abductor) and Ilya Samsonov (knee) sidelined. Leafs head coach Sheldon Keefe said before the game Murray is targeting Tuesday in Pittsburgh for his return.

Miller then put the visitors up 2-0 on a power play at 12:11 when he fired his eighth past a screened Kallgren before Toronto responded with a 10-minute flurry in the second to take the lead.

Leafs great Borje Salming was honoured for a second consecutive night on the heels of Friday's emotional pre-game ceremony ahead of the NHL's Hall of Fame game.

Diagnosed with ALS - also known as Lou Gehrig's disease - in August, the 71-year-old received another raucous welcome with family by his side as a video chronicling his career played on the scoreboard.

The Leafs started all six of their Swedish players as part of the tribute, with Leafs winger William Nylander and Canucks defenceman Oliver Ekman-Larsson taking part in the ceremonial faceoff.

Canucks head coach Bruce Boudreau played parts of seven seasons for the Leafs when Salming was at his best.

“He could play 28 minutes a night or 30 minutes a night,” Boudreau said following Saturday's morning skate. “And the next night do the same thing. He was in unbelievable (shape).”

Boudreau recalled the night he registered his only NHL hat trick in December 1977. Salming assisted on all three goals and set up two others as part of a five-point night.

“Incredible player,” Boudreau added of his former roommate. “It's hard to describe in today's world what he would be like. Or to compare him to somebody today.”

This report by The Canadian Press was first published Nov. 12, 2022.