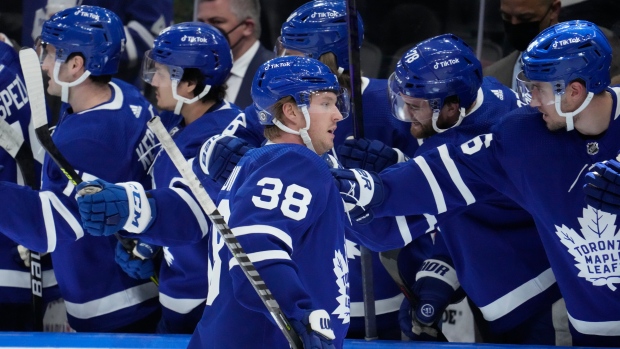 Toronto Maple Leafs defenceman Rasmus Sandin (38) celebrates his goal against the Dallas Stars with teammates on the bench during first period NHL action in Toronto on Tuesday March 15, 2022. The Maple Leafs have signed Sandin to a two-year contract extension, the club announced on Thursday. THE CANADIAN PRESS/Frank Gunn

The deal will pay the 22-year-old Swedish defenceman, who was a restricted free agent and missed the start of training camp, an average of US$1.4 million per season.

Sandin returns to the fold at a time when the Leafs have been bitten by the blue-line injury bug.

“Really good player,” said Morgan Rielly, one of Toronto's healthy defencemen. “He's a big part of our group. We're excited to get him back.”

Timothy Liljegren recently had surgery for a hernia, while Jake Muzzin has been dealing with a back issue.

Muzzin, who missed the entire 2005-06 junior season following back surgery, said the current issue is one he's dealt with over his career.

“You play a long time, a lot of games ... stuff adds up and builds up,” he said. “It's something we've managed really good for a long time.

“We have to just continue with it.”

A bronze medallist at the 2020 world junior hockey championship, Sandin has six goals and 22 assists through 88 regular-season games with the Leafs. He's added a goal in five career playoff appearances.

“Got a great set of tools,” Muzzin said of Sandin. “With experience, I think they're only going to get better.”