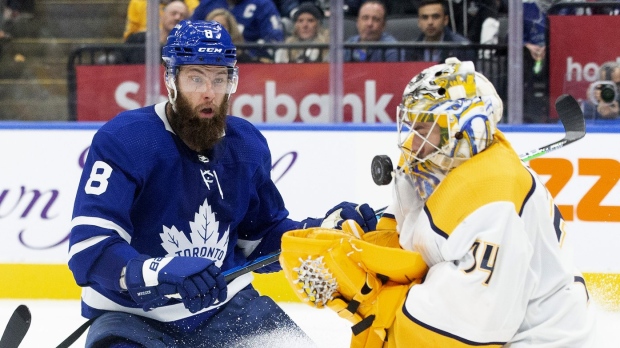 Nashville Predators goaltender Juuse Saros stops a shot as Toronto Maple Leafs defenceman Jake Muzzin (8) skates in during second period NHL hockey action in Toronto, Tuesday, Nov. 16, 2021. The Leafs will be without Muzzin for at least the next three months. THE CANADIAN PRESS/Chris Young

The Toronto Maple Leafs will be without veteran defenceman Jake Muzzin for at least the next three months.

The team said Monday that Muzzin is out indefinitely with a cervical spine injury and will be re-evaluated in late February.

The 33-year-old Muzzin was injured in Toronto's 4-2 home loss to Arizona on Oct. 17 after colliding with Coyotes winger Clayton Keller.

The Maple Leafs had the veteran defenceman on injured reserve two days later and said at the time he would miss at least three games.

Muzzin, an effective penalty-killer and shutdown defenceman, has skated in four games with the Maple Leafs this season and recorded one assist.

Toronto also announced that TJ Brodie has been placed on injured reserve with an oblique injury. General manager Kyle Dubas said Monday that Brodie will be out a minimum of two weeks.

The 32-year-old Brodie, who missed Toronto's win over visiting Vancouver on Saturday, has two assists in 15 games this season.