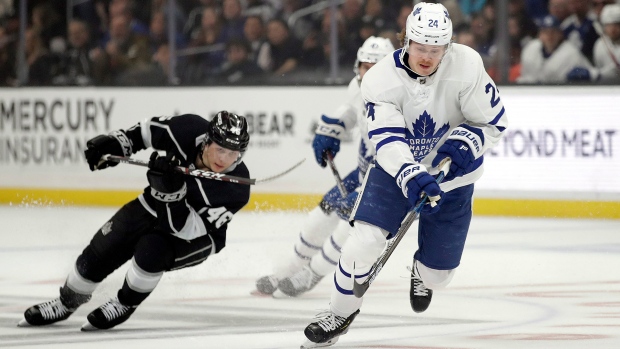 TORONTO - The Toronto Maple Leafs have cleared some salary-cap space and acquired a first-round pick this year by sending winger Kasperi Kapanen to the Pittsburgh Penguins in a multi-player deal Tuesday.

Kapanen, defence prospect Jesper Lindgren and winger Pontus Aberg were shipped to the Penguins for the 15th overall pick in this year's draft, forwards Evan Rodrigues and Filip Hallander and defenceman David Warsofsky.

The trade gives the Leafs a bit more salary-cap flexibility. Kapanen has a cap hit of US$3.2 million for the next two years.

“We're happy with it,” Maple Leafs general manager Kyle Dubas said. “Kappy is an extremely good NHL player. I don't think it should be lost that he's going off our roster and will be a great fit in Pittsburgh. So our hope is that this works out for us and for Pittsburgh, and for Kasperi as well who gave us a great five years as a member of our organization.”

Toronto now has a first-round pick back in this year's draft after trading its first-rounder (13th overall) to the Carolina Hurricanes along with Patrick Marleau last summer. The Hurricanes eventually bought out the veteran winger.

Dubas said the Maple Leafs have more work to do, including getting more cap flexibility and coming to terms with restricted free agents Ilya Mikheyev and Travis Dermott. He also said he's open to moving the first-round pick “if the right deal came along.”

The trade involves two teams eliminated in the qualifying round of the NHL's post-season earlier this month in Toronto. The Leafs lost to the Columbus Blue Jackets, while Pittsburgh fell to the Montreal Canadiens, the lowest-seeded team in the NHL's restart.

The Leafs haven't advanced past the first round of the playoffs ince the 2003-04 season and had three straight first-round exits before this year's qualifying round loss. Dubas, who has been with the Maple Leafs since 2014 and has been the GM since May 2018, said he accepts his share of the blame for those recent failures.

“I think when we don't reach our expectation or potential, I think that the blame deserves to come directly to me,” Dubas said. “I know that his is the job that I signed up for in a market like this. When things are great people are very quick to give you your kudos, and when you don't meet those expectations they're quick to honestly tell you as well.

“The criticism is deserved. We didn't meet expectations and that falls on me.”

Kapanen, 24, returns to the organization that drafted him in the first round (22nd overall) in 2014.

“I'm super excited about that. obviously,” Kapanen said. “It's where it all began for me, which is pretty cool.”

The Finn was sent to the Leafs as part of a blockbuster deal for Phil Kessel in the summer of 2015.

“Kasperi is a good, young player that brings speed to our lineup and plays the way we want to play,” Penguins general manager Jim Rutherford said in a statement. “Having previously drafted him, we know him as a player and feel he can improve our top-six.”

Kapanen figures to get a shot to play with Sidney Crosby or Evgeni Malkin on one of the Penguins' top two lines.

“I think when I was drafted, I was a little one dimensional,” Kapanen said. “I loved to play on offence and with the puck.

“Everything else was kind of lacking for me, especially to make that hop into the NHL. I got traded to Toronto and they put me through the AHL process, which looking back at it now I'm very grateful for. They turned me into more of a two-way player, which I think has helped me in the long run for sure.”

Aberg, from Sweden, had one assist in five games with the Leafs this season. He had 20 goals and 24 assists in 55 games with the American Hockey League's Toronto Marlies.

Lindgren, also a Swede, was a fourth-round Leafs pick in 2015. He had one goal and eight assists in 31 games for the Marlies this season.

Rodrigues was acquired by the Penguins from the Buffalo Sabres at the trade deadline this year. The Toronto native, who is a restricted free agent, had six goals and four assists in 45 NHL games this season.

Hallander, a second-round pick in 2018, has played in Sweden the past two years.

Warsofsky has spent the past two seasons in the AHL.