Maple Leafs sitting outside the playoffs as calendar flips to November 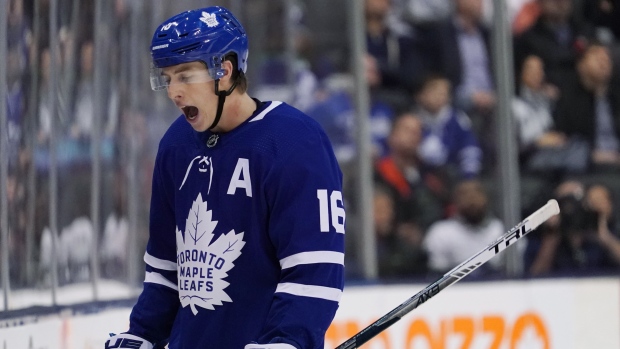 Toronto Maple Leafs centre Mitch Marner (16) reacts after taking a penalty in overtime against the Washington Capitals during NHL hockey action in Toronto on Tuesday, Oct. 29, 2019. THE CANADIAN PRESS/Hans Deryk

TORONTO - The Maple Leafs woke up Friday morning and found themselves in an uncomfortable position - on the outside looking in.

Toronto was bumped from a playoff position Thursday night when the Montreal Canadiens beat the Vegas Golden Knights in overtime.

Despite a talent-rich roster, the underperforming Leafs sit 6-5-3 on the season, with only 15 of a possible 28 points and just four victories in nine home games.

And while the players insist panic isn't setting in, they also know the clock is starting to tick.

“There's a lot of things we can improve on and that we are improving on,” Toronto centre Auston Matthews said following practice. “We're 14 games in and the world's like crashing down on us, but we're staying positive in this room.”

The Leafs were called out by Capitals star Alex Ovechkin before Tuesday's 4-3 OT setback for what he saw as their individualistic style of play.

Head coach said Mike Babcock said afterwards there was truth in the Washington captain's observation, and that both he and his team should take the critique personally.

The schedule certainly hasn't helped Toronto up to this point, but it's also not an excuse for the mental lapses, soft defensive zone coverage, average goaltending and a disjointed, sluggish power play.

The Leafs, who underwent a roster overhaul this summer that saw veterans like Nazem Kadri, Ron Hainsey, Patrick Marleau and Connor Brown sent packing, have already played four back-to-backs and won't go on a long road trip that might assist with some team bonding until the middle of this month.

So as of right now, what is that?

“Nothing. We're still trying to figure it out,” Babcock continued, pointing to the 20-game mark as a sign post. “You've got to try and get yourself established ... and you also want to be in a good position so you're not under duress.

“We've got to find a game that we can bottle.”

Toronto goalie Frederik Andersen, whose save percentage of .901 sits 17 points lower than his career average coming into 2019-20, isn't interested in dissecting the team's middling October.

“The only thing we're worried about is trying to get better,” he said. “Had we been first or had we been last, we want to try and improve on details.

“I don't want to waste time thinking about it. It's not going to do me any favours.”

The Leafs could get a big boost when they visit the Philadelphia Flyers on Saturday night with captain John Tavares inching towards a return from a broken finger that's cost him the last six games.

The star centre would give Toronto another elite option down the middle and should re-energize a power play that's 2 for 21 over the last seven contests.

“You want to be out there competing and playing, helping out your teammates and doing everything you can to be a part of it,” Tavares said. “It's not easy to watch.”

Even more so when the team isn't living up to expectations.

“We want to get the rhythm of our game and get going,” he said. “We've come out on the wrong side of a lot of tight games. (You) can't say there's been more than one, maybe two, where we've really played very poorly. We've been right there. We've got to find a way to make some plays at key times and not make mistakes.

“We haven't played to the level we're capable of, our standard.”

If Tavares does suit up against Philadelphia, which will be on a back-to-back after facing New Jersey on Friday, it would likely be with regular linemate Mitch Marner and Trevor Moore, who's the latest placeholder for Zach Hyman.

The grinding winger tore his ACL last spring in the post-season, and while he's getting closer, Babcock wouldn't say when he's expected back.

“A huge part,” Babcock said of Hyman's importance. “Even the people that aren't fans are now fans.”

Another player Toronto will be without Saturday is defenceman Jake Muzzin, who practised in a red non-contract jersey after suffering a charley horse Tuesday, but will miss the game for personal reasons.

The Leafs showed some life against the Capitals - they battled against a physical opponent and led in the third period - but it was only a step in the right direction.

They would like to see plenty more in the City of Brotherly Love.