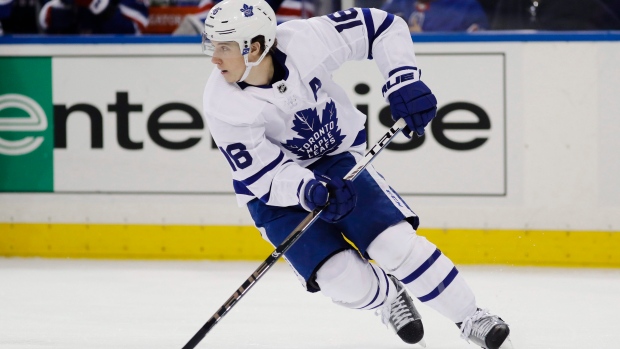 TORONTO - Mitch Marner looked at his game in the aftermath of the Toronto Maple Leafs' disappointing summer and came to a conclusion.

It's time to get to the net.

The silky smooth winger has made his living as a pass-first player, and it's served him well.

Apart from staying in shape for the league's expected return in early 2021 since the Leafs were bounced in the qualifying round of the NHL's restart four months ago, Marner has been focusing on getting to the dirty areas on the ice.

“Being around the net more to put the puck in,” Marner said Wednesday of what he looked to improve. “Goals is something where I need to ask more of myself.”

The Leafs were left frustrated in their five-game loss to the Columbus Blue Jackets in August - high-flying Toronto scored just 10 times, including once into an empty net, and registered an absurdly-low shooting percentage - after sitting second during in the league with 237 goals before the schedule was suspended because of the coronavirus in March.

Marner, who hasn't scored in his last 11 post-season outings, said he's spent considerable time in the wake of the Leafs' ouster working on getting pucks on target from different angles and situations.

“I've been trying to really be OK and comfortable with myself shooting regardless of how the shot comes off,” said the six-foot, 175-pound forward. “That's something I'm trying to get my head wrapped around and something I'm becoming more confident with.”

Marner is preparing for the season with teammates at Toronto's practice facility, but is also continuing his charitable work as the pandemic's second wave sweeps across North America.

The Markham, Ont., native's Marner Assist Fund was unable to hold its usual gala this year, and is instead partnering with Intact Insurance for Thursday's “One Team United” online event - dubbed a “stream-a-thon” - to raise money to provide food and supplies for families in need.

“We know times are tough on a lot of people,” Marner said. “We want to try and give as many meals out as we can.”

Leafs legend Doug Gilmour and comedian Gerry Dee are part of the lineup, which Marner will host at www.marnerassistfund.com/stream along with Sportsnet's Tim Micallef and Sid Seixeiro.

“We still wanted to do something,” Marner said. “We thought, 'What better than to try and help feed people during the holidays?' It's an important time ... it brings everyone together.”

The Leafs, meanwhile, are mostly back together for informal skates as they await word on the upcoming season. Marner said there's a buzz around the team after general manager Kyle Dubas made a series of moves to improve the roster despite being tight to a cap that is staying flat at $81.5 million for the foreseeable future because of the pandemic's economic realities.

The big splash was defenceman T.J. Brodie's four-year, $20-million deal in free agency, but that was just one change aimed at altering both Toronto's culture in the locker room and play on the ice.

Jason Spezza is back again at the league minimum, while fellow veteran forwards Joe Thornton and Wayne Simmonds also signed on. Pencil in bruising blue-liner Zach Bogosian along with a couple of other additions, and the supporting cast is poised to have a decidedly different feel.

“It's been great seeing all the new guys,” Marner said. “We're still being smart (with health and safety protocols), but it's been a lot of fun feeling like the team's together again.”

Dubas told a “Coaches Open House” virtual forum last month that Toronto could look at dressing 11 forwards and seven defencemen as opposed to the usual 12 and six setup after the Tampa Bay Lightning used the formula on their way to winning the Stanley Cup in late September.

That would likely mean more ice time for Marner, Auston Matthews, John Tavares and William Nylander - the Leafs' Big Four who chew up roughly half of the team's salary budget.

“We've just got to be ready for any situation, any amount of minutes,” Marner said. “Whatever Kyle and (head coach Sheldon Keefe) think will help us win, we're all OK with and we're all ready to sacrifice for.”

The Leafs took too many nights off in 2019-20 before the world changed in March. That pushed them into the qualifying round, where they fell to Columbus, instead of the usual 16-team playoff bracket.

“The pieces we added, they're great pieces that will help us a lot,” Marner said. “But we've got to make sure we're ready to play every night.

“If we don't come ready to play, it doesn't matter.”

And with the league believed to be focusing on a mid-January return - including an all-Canadian division due to border restrictions - Marner said the time to show what this roster can truly do is fast-approaching.

“You've got to be ready at any moment,” he said. “Things could start up really whenever.”

This report by The Canadian Press was first published Dec. 16, 2020.