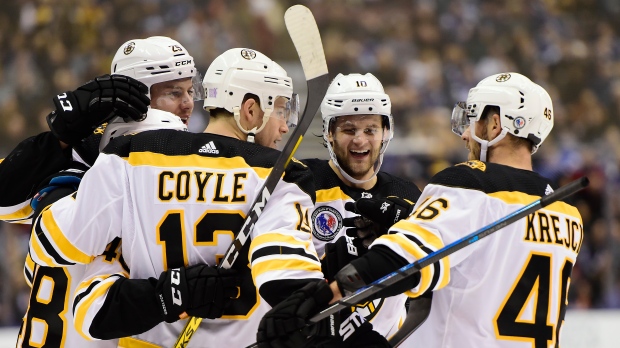 TORONTO - Brad Marchand scored twice in the third period, including the winner, as the Boston Bruins defeated the Toronto Maple Leafs 4-2 on Friday night.

Charlie Coyle, with a goal and an assist, and Zdeno Chara provided the rest of the offence for Boston (12-3-4). Tuukka Rask made 29 stops for the Bruins, who snapped a 0-2-2 slide.

Auston Matthews and Kasperi Kapanen replied for Toronto (9-8-4), which got 30 saves from Frederik Andersen.

The Leafs have now dropped four games in a row - the last three setbacks coming in regulation - following a trio of victories.

Toronto, which beat the Bruins 4-3 in overtime at Scotiabank Arena on Oct. 22, visits the Pittsburgh Penguins on Saturday, while Boston is home to the Washington Capitals.

Boston snapped a 1-1 tie just 11 seconds into the third when Marchand scored his 12th goal of the season by depositing his own rebound after stepping around Leafs defenceman Morgan Rielly.

Toronto replied at 3:54 when Kapanen took a feed from John Tavares and scored his sixth, but Marchand silenced the crowd just 1:14 later - again following up his initial shot.

Play was even for the rest of the third before Chara iced it into an empty net with 1:33 left in regulation as Tavares smashed his stick over the crossbar in frustration.

The Bruins were minus defenceman Torey Krug, as well forwards Jake DeBrusk and Brett Ritchie, who are all nursing upper-body injuries.

Boston, which has eliminated its Atlantic Division rival in the first round of the playoffs the last two springs, led 1-0 after 20 minutes before the Leafs equalized midway through the second.

Jake Muzzin's point shot looked to be sailing wide, but Matthews lunged his stick out in the slot for a redirection that fooled Rask for his 14th at 9:20. The goal stood after a brief video review.

The Bruins had a chance to retake the lead moments later when Sean Kuraly fired high over Andersen's net on a breakaway.

Boston got a power play later in the period, with David Pastrnak just missing on a one-timer and Patrice Bergeron hitting the post on the rebound off the end boards.

Toronto nearly scored a beauty to grab its first lead when Kapanen put the puck through Bergeron's skates at the blue line and then slid a no-look, behind-the-back pass to Tavares, but the Leafs captain couldn't find the target.

Boston grabbed a 1-0 advantage at 13:48 of the first when Coyle scored his third of the campaign after another Toronto brain cramp in the defensive zone. Leafs blue-liner Travis Dermott was battling the Bruins centre in front, but left his check to challenge Matt Grzelcyk, who promptly fed Coyle from behind Andersen's net.

Both goalies were sharp early, with Andersen stopping Marchand and Pastrnak, while Rask stymied Andreas Johnsson on a partial breakaway before Spezza shanked a loose puck with what looked like a sure goal on his stick. Matthews also hit the post from in tight down low.

Moore took that crunching, open-ice hit from Chris Wagner later in the period, went right to Toronto's locker room and was ruled out shortly thereafter.