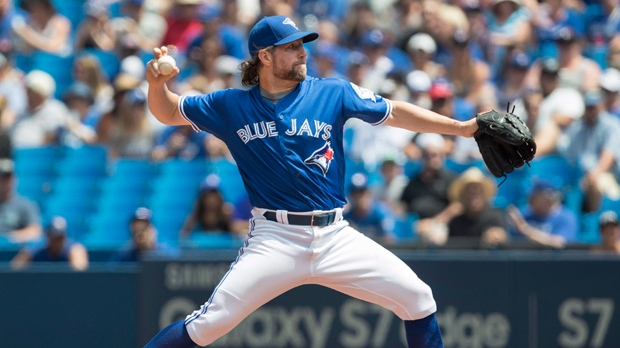 TORONTO -- Nelson Cruz hit a grand slam off a struggling R.A. Dickey, then added a three-run shot off Drew Storen as the Seattle Mariners overpowered the Toronto Blue Jays for a 14-5 victory on Saturday.

Corey Seager tagged Jesse Chavez with a two-run shot on a day that Toronto's pitching floundered in 33 C heat at Rogers Centre.

Dickey (7-11) scuffled all through his brief outing, loading the bases on two separate occasions, hitting two batters, issuing two walks, and allowing seven hits and six runs over three-plus innings -- his shortest start of the season.

Chavez and Storen weren't any better. Chavez allowed five runs on six hits over 2/3 of an inning while Storen walked one and gave up two hits, including Cruz's towering three-run shot, in one inning of work.

Norichika Aoki had two RBIs for the Mariners (50-47), and Seth Smith plated another run. Hisashi Iwakuma (11-6) struck out three and allowed two runs on four hits and three walks over six innings.

Thole gave Toronto a 1-0 lead in the second inning, hitting a sac fly to shallow left field to score Kevin Pillar from third base. The throw from Aoki was just wide of the plate, allowing Pillar to slide in safely.

Dickey hit back-to-back batters to load the bases with one out in the second before Cruz smashed his 24th homer of the season into the centre-field stands for a 4-1 lead.

Dickey loaded the bases with nobody out in the third before giving up an RBI single to Aoki. Franklin Morales, fresh off the disabled list with left arm fatigue, came in to relieve the knuckleballer. Seattle scored another run on a double play, then Robinson Cano popped out to end the inning.

The Mariners tacked on five runs in the sixth off Chavez. Aoki earned his second RBI with a base hit and Smith followed with an RBI single to put the Mariners up 8-1. A double play off Cruz's bat scored Seattle's ninth run before Seager hit his two-run shot to centre. Bo Schultz replaced Chavez and got a ground-ball out from former Blue Jay Adam Lind.

Storen started the eighth inning with a walk and ground-rule double before Cruz's second homer sent most of the 47,517 fans to the exits. Storen struck out Seager, gave up a single to Lind and got a double play to end the inning.

Toronto responded in the bottom half of the frame with two homers, a solo shot from Saunders and a two-run blast from Smoak.

NOTES: The Blue Jays reinstated Chris Colabello off the restricted list before the game and designated him off their 25-man roster. Colabello, who was suspended 80 games in April after testing positive for a banned substance, remains on Toronto's 40-man roster. His suspension ended on Saturday.