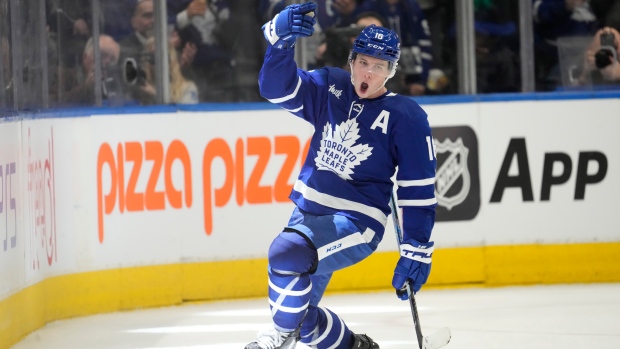 TORONTO - Mitch Marner scored on a power play with 1:15 left in regulation as the Toronto Maple Leafs defeated the Nashville Predators 2-1 on Wednesday night.

John Tavares added a goal and an assist for Toronto (26-9-7), which was minus injured star Auston Matthews. William Nylander added two assists.

Filip Forsberg replied for Nashville (19-15-6). Juuse Saros stopped 33 shots for the Predators, who saw their season-high four-game winning streak come to an end.

Marner took a pass from Nylander on a late four-minute power play and beat the lights-out Saros, who was caught out of position, for his 16th goal of the season.

Murray then held the fort in the dying seconds as the Predators pushed for an equalizer.

Toronto improved to 31-15-2 all-time without Matthews - absent from the lineup for the first time in 2022-23 with an undisclosed ailment - since picking him first overall at the 2016 NHL draft.

The goaltenders put on a show in the first period, with Murray denying Tanner Jeannot on three consecutive chances - including a no-look desperation effort while swimming in his crease - before Saros made terrific stops on Nylander and Timothy Liljegren at the other end.

Tavares then opened the scoring with 3:06 remaining when he took a pass from Nylander on a 2-on-1 and slid home his 20th of the campaign - and the Toronto captain's fifth in the last four games.

Forsberg got the visitors back even 1:46 into the second when he snuck behind Nylander, who moved from the wing to centre with Matthews out, before taking a pass and deking around Murray for his 17th.

Murray made a pair of nice stops on Ryan Johansen early in the third to keep things tied 1-1 before Saros stopped Michael Bunting on a 2-on-1.

Toronto, which was also minus defenceman T.J. Brodie because of a rib injury, killed a penalty with under 10 minutes left in regulation, with Murray again standing tall on a couple of Nashville chances.

The Leafs then went to the power play when Mark Jankowski was assessed a four-minute penalty for high-sticking on Morgan Rielly with 4:22 left on the clock to set up the decisive sequence.

Last season's Hart Trophy winner sat out with an issue head coach Sheldon Keefe said he'd been dealing with “for a while.” Matthews, who took part in Toronto's optional morning skate and is listed as day-to-day, has 20 goals and 47 points in 41 games this season. The 25-year-old missed nine contests in 2021-22 through injury or suspension, but still scored a league-best 60 times in 73 contests.

Matthews' absence opened the door for the 26-year-old from Wainwright, Alta., to make his NHL debut. The American Hockey League's reigning player of the week with six points in three games, McMann said the short notice after getting recalled from the Toronto Marlies on Tuesday had both positives and negatives. “You want to prepare,” he said before the game. “But you also don't want to overthink it.”

The Predators and Saros didn't have the start to 2022-23 they were looking for, but things are looking up for both the team and player. Last season's third-place finisher in Vezina Trophy voting stopped an eye-popping 64 shots in a recent victory over the Carolina Hurricanes and registered a 38-save shutout in Ottawa against the Senators on Monday. “We hung him out to dry a lot,” Nashville captain Roman Josi, who played the 800th game of his NHL career, said of the team's play in front of Saros early on. “We've been playing better, but he's on another level.”

This report by The Canadian Press was first published Jan. 11, 2023.