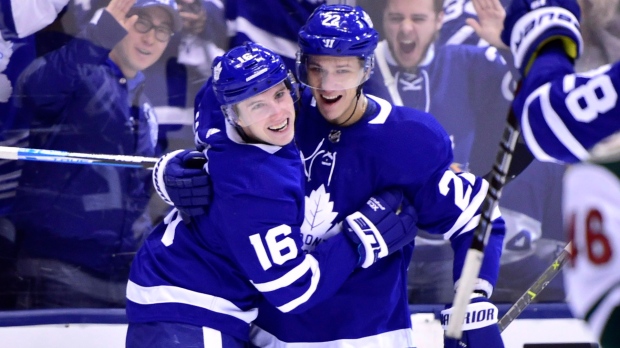 Toronto Maple Leafs forward Mitch Marner is known for his slick passes on the ice. But on Wednesday morning, he was playing some defence with the media.

Entering the season, Maple Leafs general manager Kyle Dubas had to try to sign Marner, William Nylander and Auston Matthews before they become restricted free agents on July 1. Dubas has now nailed down two of the three, signing Nylander to a six-year, US$41.77-million contract while Matthews reached a five-year, $58.17-million extension on Tuesday.

After the Matthews deal was announced, Marner's agent Darren Ferris told the Toronto Star that his client had been low-balled by the Maple Leafs. The next day, Marner was distancing himself from those comments.

"Honestly, I didn't really see (the comments)," said Marner. "I haven't really looked at my phone today. It's probably for the best I haven't done that. I honestly really haven't seen them."

Marner then hesitantly asked reporters in the Maple Leafs dressing room at Scotiabank Arena what exactly his agent had said.

Ferris told The Canadian Press on Wednesday that he and Leafs management have kept in contact throughout the season, but the two sides will begin formal contract negotiations once the 2018-19 campaign is done.

"Neither I nor Mitch wanted any distractions during the playing season," said Ferris. "This team, I believe, has a chance to win the Stanley Cup.

"Things are going in the right direction, we're not far off. Everything has been positive. The market will dictate the market at that time."

Ferris said the Leafs tabled a low offer last summer, but added that's standard practice at that time of year.

"I think that was taken out of context," Ferris said, referring to the story from Tuesday. "This was a discussion that was about the summer ... where offers are low, which is a normal course of business.

"Since that event, there's been discussions, there's been positive dialogue. We weren't far off when we left and we last ended on a positive note. Everything was good and we agreed, 'Hey, let's wait until the end of the season."'

"Words are spun around and things sometimes," said Marner. "Me and my family love it here. My agency loves it here. This is a great place to play hockey. We have a great management team and a great team in this locker-room and we all want -- including myself -- to be a Leaf for a long time and I'm sure that will happen."

Both Dubas and Ferris have said that negotiations between the two sides are on hold until the off-season so that Marner can focus on playing. That doesn't mean there won't be any communication, however.

"It's not like we shook hands, see you later and we'll talk at the end of the year. That's not what happens and I think it gets taken out of context. Things are going in the right direction and we're not far off. Again, the market will dictate the market at that time and I'm sure there will be continued banter back and forth between us and them."

Maple Leafs head coach Mike Babcock, who stays out of the loop on his players' contract negotiations, likes that Marner's camp has shelved negotiations with the team.

"What he's done is make clear that they're not doing anything about it until the end of the season," said Babcock. "So how can that be in the way of anything? Just get in there, play, and not worry about it, you'll deal with it later. I think that they've done that because they don't want it to be a distraction.

"Mitch is going to be a lifetime Leaf."