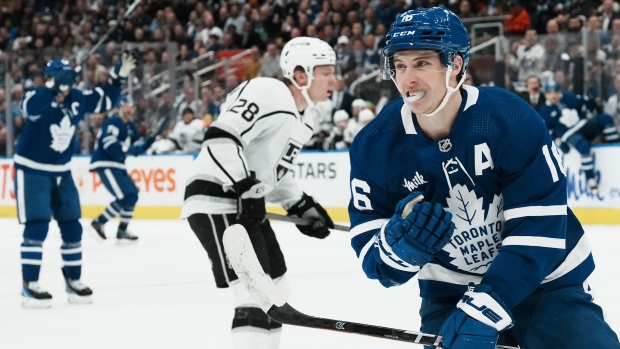 So after Kampf scored in the Maple Leafs' 5-0 win against the Los Angeles Kings on Thursday, in a game Marner extended his franchise-record point streak to 21 games, he continued to commend Kampf's contribution to Toronto's cause.

“I was really excited for him,” Marner said. “That's a guy who I keep talking about. I really think he does a lot for this team that goes unnoticed.”

Kampf is one of the Maple Leafs' top faceoff performers and penalty killers. Toronto killed off two more penalties against the Kings, including a five-minute match penalty to Pierre Engvall for intent to injure in the third period.

The Maple Leafs have gone 9-for-9 in penalty kills in back-to-back shutouts against the Dallas Stars and Kings this week.

“The last couple of games, we have been dialed in and have played better and better on the defensive side,” Kampf said.

The Maple Leafs busted the game wide open when Engvall, Kampf and William Nylander all scored 1:06 apart early in the second period to make it 3-0.

With Canadian pop star Justin Bieber among the 18,567 at Scotiabank Arena, Marner scored his 11th of the season. He has 10 goals and 18 assists in his 21-game point run.

Marner blasted a slapshot from just inside the Kings' blue line at 13:29 of the middle frame.

“It's a nice clap bomb he has there,” said Maple Leafs centre Auston Matthews, who added his 14th goal in the third period. “I didn't know he could shoot the puck like that.”

Engvall's night ended early in the third period when he was given a match penalty for intent to injure after he high-sticked Kings defenceman Sean Durzi, a former Toronto draft pick, in the back of the head in the neutral zone.

During the ensuing five-minute power-play, Los Angeles winger Adrian Kempe scored. But the goal was rescinded after a video review determined the play was offside to preserve Ilya Samsonov's first shutout in a Maple Leafs sweater.

Samsonov made 29 saves for the seventh shutout of his career.

“Thank you, video coaches,” he said.

The Maple Leafs outshot their opponents 41-29.

Kings netminder Jonathan Quick, who made 36 saves, kept his club in the game for the opening 25 minutes.

The Maple Leafs had outshot the visitors 19-7 when Engvall beat Quick with a wrist shot for a power-play goal 5:10 into the second period.

Twenty-six seconds later, Kampf employed linemate Alex Kerfoot as a decoy to score on a two-on-one rush started by Kerfoot to provide the Maple Leafs with a two-goal advantage.

Nylander checked in with his 15th of the season, and fifth in seven games, on a breakaway goal 40 seconds later. He also set up Matthews midway through the final period.

Kerfoot was good for two assists against the Kings.

Maple Leafs defenceman T.J. Brodie returned to the lineup after a 12-game absence because of an oblique injury, playing alongside newcomer Conor Timmins. Toronto went 9-0-3 without Brodie.

The Maple Leafs play the middle outing of their three-game homestand against the Calgary Flames on Saturday.