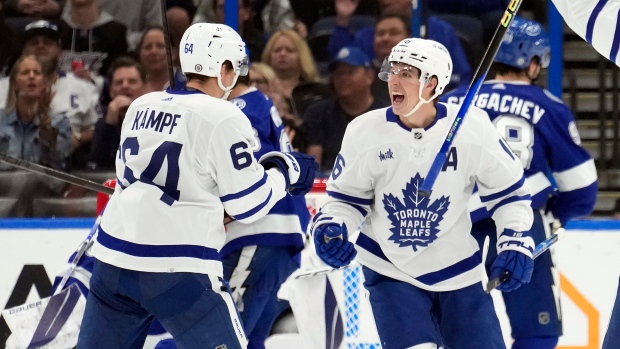 Alex Killorn scored from the right circle 33 seconds in the extra period.

Tampa Bay had taken a 3-2 on power-play goals by Nikita Kucherov and Ross Colton in the opening 4:34 of the third. Kucherov's goal came after Marner was sent off for tripping at 4 seconds.

Toronto's John Tavares had a goal disallowed with 4:04 left in the third after a review determined he kicked the puck into the net,

Andrei Vasilevskiy made 36 saves, and Vladislav Namestnikov also scored for the Lightning.

Just 22 seconds after a goal by Tampa Bay's Brayden Point was overturned for offside after a video review, Nylander made it 2-1 with 3:10 left in the second on his eighth goal in the last 10 games.

Namestnikov tied it at 1 on his first goal in 24 games 2:22 after Marner's goal.

Stamkos was honored pregame after becoming the first Lightning player and 95th in the NHL to reach 1,000 points Thursday night at Philadelphia.

He received a Tiffany Crystal from Don VanMassenhoven, who represented the NHL, and an engraved gold stick from Tampa Bay owner Jeff Vinik.

Stamkos set the Lightning record with an 18-game point streak at Toronto on Mar. 11, 2009 and said he remembers it “like it was yesterday because my sticks got stolen after the game at the Toronto airport.”