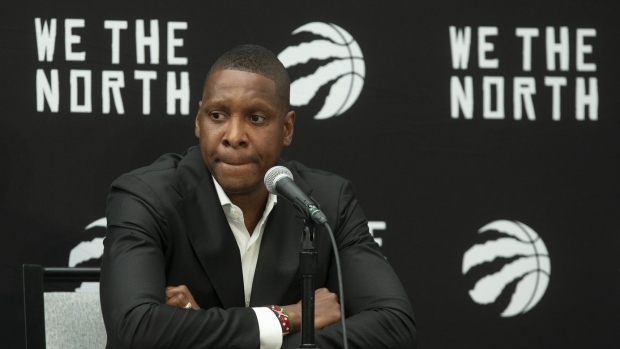 The past few explosive weeks in the NBA have seen Phoenix owner Robert Sarver and Boston coach Ime Udoka suspended. Minnesota's Anthony Edwards was reprimanded for homophobic comments. Kyrie Irving and Kevin Durant were at the centre of a chaotic Brooklyn off-season.

NBA training camps tipped off Tuesday after some of the most turbulent times the league has seen in some time.

Raptors president Masai Ujiri was asked if a league that prides itself on social awareness is slipping.

"I think we all have to revisit our cultures and the way our organizations are run and how we work," Ujiri said at the team's annual media day. "Respecting the workplace is very, very important. It's the No. 1 key and core to what we do in our organization and what (NBA commissioner) Adam Silver preaches in this league.

"The things that start to deviate from that … people are going to make mistakes. They're humans, and they make mistakes. We have to be held accountable, too.

"I know in our organization, our culture, we treat people well, we have respect for whatever positions we have. These cases are learning examples for us. It tells us we have to tighten up in everything we do."

The embattled Sarver was suspended one year and fined US$10 million by the NBA over workplace misconduct that included racist speech and hostile behaviour toward employees. He said last week he intends to sell the team.

"There is no place for that kind of behaviour in our league," Ujiri said. "People are going to make mistakes and sometimes there are consequences for theses mistakes. Thankfully it has ended up in the right place."

There had been plenty of optimism around the Celtics after their surprise run to the NBA Finals, but then Udoka was suspended for the season after a months-long investigation that found multiple violations of team policies reportedly involving an inappropriate relationship with a woman in the organization.

The Toronto Raptors are wearing a black No. 6 patch on their jerseys this season — but it's in memory of NBA legend Bill Russell, not a nod to Toronto's nickname.

"Oh, man, it’s incredible," Raptors guard Fred VanVleet said. "It makes sense for us, right? Being in the 6ix (the city's nickname coined by Drake, a reference to its 416 area code). But just for what he meant to the world, it's hard to find a better icon and a better ambassador for the game and for humanity and the barriers that he broke and the things that he had to endure so that guys like myself can even be sitting here in front of you today."

Russell was the centrepiece of the Celtics dynasty that won 11 championships in 13 years. He's being honoured not just for his incredible success on the court, but for his commitment to civil rights off it.

The NBA announced that his No. 6 will be retired leaguewide, and every player will wear the patch this season.

"It's hard to put into words what exactly he meant, but he's an incredible human being and a guy that definitely needs to be held up in the highest respect to the end of time … an incredible journey and incredible life and meant so much to so many people," VanVleet said.

FROM SILVER SCREEN TO SCOTIABANK ARENA

The casual sports fan or movie buff might be more familiar with Bo Cruz than Juancho Hernangomez.

The new Raptor played the lead role of Cruz, a fictional character, alongside Adam Sandler in this year's Netflix hit movie "Hustle."

Hernangomez, signed by the Raptors in July, said his acting debut began out of boredom during the COVID-19 pandemic. He was living with brother Willy in Charlotte after the NBA shut down in the early days of the pandemic, and decided to audition for the movie.

"It was fun. It was tiring," Hernangomez said. "We were shooting for two years, two summers, sometimes like 12 to 14 hour days shooting. But I met a lot of great people, it was a great experience that is going to last forever."

Another great experience was helping Spain capture the EuroBasket title barely a week ago. Hernangomez scored a team-high 27 points in the gold-medal game, while brother Willy was named tournament MVP.

Hernangomez said he heard good things about the Raptors franchise from Marc Gasol, Calderon and Scariolo.

The 26-year-old landed in Toronto on Sunday night and flew to Victoria for camp on Monday, so he had no time to explore his new home.

"When I played on other teams, I loved to come to Toronto," he said. "Great city, and lots of things to do."

The six-foot-nine, 214-pound Madrid native averaged 3.3 points, 2.5 rebounds and 11.1 minutes in 40 appearances (nine starts) last season with Boston, San Antonio and Utah. He was picked 15th overall by Denver in the 2016 NBA draft.

Nick Nurse has been impressed with Canada's women's team at the FIBA World Cup in Sydney, Australia.

Nurse, head coach of the Raptors and Canada's men's team, was up early enough Monday morning to catch the women's game against No. 3 Australia before heading to the team's media day obligations.

And while the fourth-ranked Canadians lost by three points to the Aussies — their first loss of the tournament — Nurse said "they have played great."

"They could have won that game against a tough Australia team in Australia but, man, they looked good," he said. "I think (the loss to Australia) will be a good growth game for them for when it matters in the knockout round.

"I would encourage everybody, if you're up, turn on your TV or get up 20 minutes earlier than you normally do and watch them and support them because they’re really fun to watch."