Matthews believes Leafs' playoff pain will pay off: 'We're writing our own story' 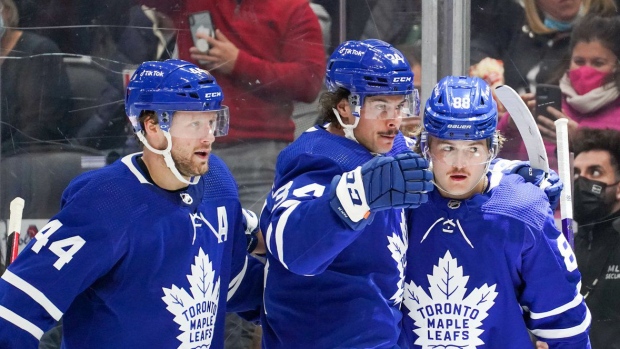 The Maple Leafs star centre, in truth, has little choice.

Toronto suffered through another bitter first-round disappointment last spring, falling to the Tampa Bay Lightning in seven games after taking a 3-2 lead in the series.

But that loss, at least on some level, felt different both inside and outside Toronto's locker room.

Unlike their soul-crushing collapse up 3-1 against the underdog Montreal Canadiens in 2021 or consecutive seven-game defeats to the Boston Bruins in 2019 and 2020, the Leafs didn't wilt in going toe-to-toe with the two-time defending Stanley Cup champions in a matchup consisting of razor-thin margins.

“It's still disappointing with the same result,” Matthews said Friday at the NHL/NHLPA player media tour just outside Las Vegas. “But I think there's a lot of things that you can take - a lot of positives - from it and move forward.

The league's first 60-goal scorer in a decade and Toronto's first Hart Trophy winner as NHL MVP since 1955 doesn't have to look any further than last season's Stanley Cup final matchup to support his argument.

The Lightning suffered through a string of playoff heartbreaks before hoisting hockey's holy grail in 2020 and 2021, while the Colorado Avalanche finally got over their second-round hurdle on the way to winning the franchise's second title in June.

“It took them a really long time to win,” Matthews said of Tampa and Colorado. “They had to go through a lot.

“We're all working towards the same goal.”

The path to that goal starts with getting past the opening round for the first time since 2004 - before Twitter and before the league's salary cap - for a franchise that hasn't captured the sport's ultimate prize since 1967 when the NHL comprised of just six clubs.

“Every team and every journey is different,” Matthews said. “We're writing our own story.

“We are all extremely motivated.”

Leafs defenceman Morgan Rielly added a big part of that motivation comes from how the Tampa series played out - and the narrative in its wake.

“It really doesn't make you feel any better,” he said. “It honestly doesn't really give you any more pride or anything in relation to how you handle it emotionally. It's almost worse because you're right there.

“It just makes you want to come back and want to win that much more. If you use it as a tool to motivate you and to drive your off-season training, losses like that are going to hopefully tee you up to be successful one day.”

Toronto general manager Kyle Dubas once again resisted any potential urge to make a change behind the bench or with his roster, instead deciding to once again run it back with head coach Sheldon Keefe at the reins of largely the same core group led by Matthews, Rielly, Mitch Marner, John Tavares and William Nylander.

“It's a boost of confidence for us to have their confidence,” Rielly, whose eight-year contract extension is about to kick in, said of Toronto's front office. “To keep guys together, to give guys an opportunity to right the ship and to change the script, I think that's a cool opportunity. That's what's extremely motivating.

“This group has lost together, and it truly does make you want to win together that much more.”

Toronto's biggest question mark is in the crease after goaltender Jack Campbell signed with the Edmonton Oilers in free agency.

Matt Murray was acquired from the Ottawa Senators in a trade, while Ilya Samsonov inked a deal with the Leafs in July after parting ways with the Washington Capitals.

Rielly, who played with Murray on Team North America at the 2016 World Cup of Hockey, said the two-time Cup winner with Pittsburgh's championship pedigree should help Toronto at the game's most important position despite a rough two-season stint in the nation's capital.

“He's an incredible goalie and he's had an incredible career,” Rielly said. “Whenever you can add a player like that into your locker room who's had Stanley Cup success - in that position especially - is a positive.

“It makes our team better.”

And with training camp set to open next week, the quest to finally get over that playoff hump begins anew.

“We're not going to quit on this process.”